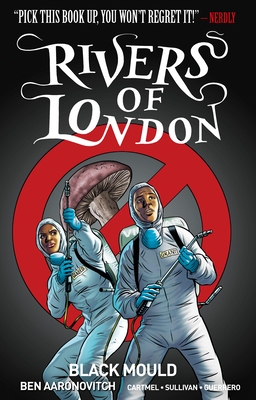 Something dark and slimy is dripping through the walls of suburban London. Not the usual stuff that smells funny and can be hell on the lungs, this mould is possessed by some dark power full of bad intentions. Looks like it's another case for London's one and only trainee wizard cop, Police Constable Peter Grant, and his reluctant partner, Sahra Guleed!

Tying directly into the Rivers of London continuity, set between Foxglove Summer and The Hanging Tree

Aaronovitch is joined by Doctor Who writer Andrew Cartmel for this gripping new series.

"Really enjoying this book, these characters, this creative team, and Peter Grant’s London...4 out of 5" - Nerdly

"Verdict: Buy it now and get addicted to this series." - Talking Comic Books

"I was impressed with how well Black Mould blends spooky, scary elements into the real-world setting of the London streets." - CG Magazine

"will make you question every strange black spot in your home and wonder whether it’s growing...
Like the last two volumes, Black Mold is another fun tale, with a couple of sideline stories, and together with the colorful, flashy artwork, it’s a great installment to hold readers over until the next Rivers of London novel comes out." - San Francisco Book Review

Ben Aaronovitch has written for TV, his credits including Doctor Who and Casualty; his Rivers of London novels are international bestsellers and he has finally fulfilled his dream of adding a comic to the series; in this he has been joined by fellow writer and regular Doctor Who contributor Andrew Cartmel.

Fellow Doctor Who creators, artist Lee Sullivan, and Luis Guerrero, also join the team. Lee has a long, illustrious career as a comics artist, his work including not just Doctor Who but the likes of Transformers, Robocop and Judge Dredd. Guerrero has worked as a colorist for Vertico and Image comics, and his credits include Doctor Who, The Troop and Mycroft for Titan.
Loading...
or
Not Currently Available for Direct Purchase