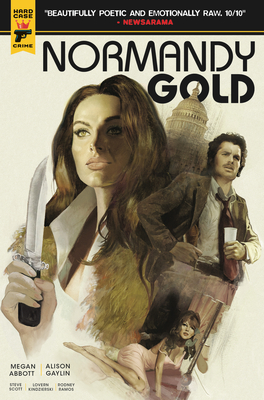 Written by acclaimed author Megan Abbott (You Will Know Me, TV writer on HBO’s The Deuce - created by The Wire's David Simon), and bestselling crime novelist Alison Gaylin (What Remains Of Me), with artwork by Steve Scott (Batman, X-Men Forever, JLA).

When her younger sister is found at the center of a brutal murder investigation, tough-as-nails Sheriff Normandy Gold is forced to dive headfirst into the seedy world of 1970s prostitution and soon discovers a twisted conspiracy leading right to the White House.

"Brutally poetic and emotionally raw. 10 out of 10." - Newsarama

"A cross between The Punisher and Wonder Woman.​" - Big Comic Page

“Normandy Gold is a love letter to the 70's... a cinematic experience on paper. ” - Outright Geekery

“Feels like a film directed by Peter Yates or Sidney Lumet.” - Capeless Crusader

"All I needed was Abbott’s name on it!” - Book Riot

"A cross between a noir thriller and a 70’s exploitation movie...Pretty close to perfect." - Comic Bastards

"Leaves you breathless." - Reading with a Flight Ring

Megan Abbott is an American Edgar-winning author of seven crime novels, including Dare Me and The Feverauthor. In addition to crime fiction she is also known for her non-fiction analysis of hardboiled crime fiction. Her novels and short stories have drawn from and re-worked classic subgenres of crime writing, with a female twist.

Alison Gaylin is a writer and journalist who has covered the arts and entertainment for more than fifteen years. Her first novel, Hide Your Eyes, debuted in March, 2005 with nearly a quarter of a million copies in print and was nominated for the prestigious Edgar Award for a first novel. The sequel, You Kill Me, was published in 2006 to rave reviews. Her first hardcover, Trashed, out in September 2007, launched NAL's new Obsidian imprint. Alison lives in upstate New York with her husband, young daughter and old dog.