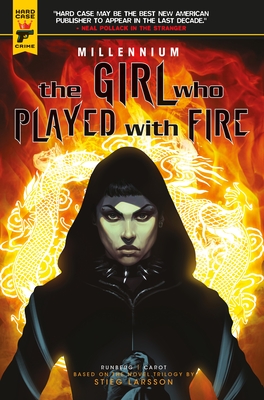 The Girl Who Played With Fire

As Blomkvist, alone in his belief in Salander's innocence, plunges into an investigation of the slayings, Salander herself is drawn into a murderous hunt in which she is the prey, and which compels her to revisit her dark past in an effort to settle with it once and for all.

Praise For Millennium Vol. 2: The Girl Who Played With Fire…

"A compelling, edge-of-your-seat mystery in words and art, and fans of the original Stieg Larsson book will uncover new meaning in his words and worlds." - Multiversity Comics

"Worthy of the Hard Case Crime logo. The messages of the story come across loud and clear." - Comic Bastards

Sylvain Runberg is a Belgian screenwriter and novelist who, divides his time between Stockholm, Provence and Paris. He has had more than 50 books published by the largest French publishers (Glénat, Le Lombard, Dupuis, Dargaud, Casterman, Soleil, Futuropolis etc,...) and is now translated into 15 languages, having sold in total over 1 million copies worldwide.

Jose Homs is a Spanish comic artist who has worked for US companies like Marvel, but also for European publishers like Dupuis. For the US, he has worked with writer Christopher Hinz on series such as Blade. He has also drawn for western collections ('Marvel Westerns') and on the Red Sonja series with Frank Cho and Doug Murray as writers in 2007-2008. Homs' work has also appeared in magazine Heavy Metal, and in the Spanish anthologies 'Barcelona TM' and 'Revolution Complex'.