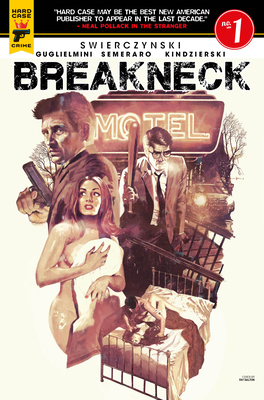 A mild-mannered consultant is reluctantly forced into a race against the clock as he attempts to thwart a terrorist plot, in this gritty, countdown crime thriller set in modern-day Philadelphia.

During an angry confrontation at two-bit motel, mild-mannered consultant Joe Hayward is thrown headfirst into the middle of a frightening terrorist plot to bring Philadelphia to its knees. With only two hours to thwart the attack, Joe is going to need all the help he can get... including that of his wife's paramour!

DUANE SWIERCZYNSKI is the author of several crime thrillers, including the Edgar-nominated and Anthony Award-winning Expiration Date, as well the Charlie Hardie series (Fun & Games, Hell & Gone, Point & Shoot), which has been nominated for Anthony, Shamus, Macavity and Barry awards and optioned for TV. He currently writes Birds of Prey for DC Comics, Godzilla and the forthcoming Judge Dredd for IDW Comics, Bloodshot for Valiant Comics, and has written about the Punisher, Cable, the Immortal Iron Fist, Werewolf By Night, Black Widow and Deadpool for Marvel Comics. Duane has also collaborated with CSI creator Anthony E. Zuiker on a series of bestselling "digi-novel" thrillers which include Level 26: Dark Origins, Dark Prophecy and Dark Revelations. In a previous life, he worked as an editor and writer for Details, Men's Health and Philadelphia magazines, and was the editor-in-chief of the Philadelphia City Paper.

SIMONE GUGLIELMINI is an Italian comic book artist, who is best known for his work on critically acclaimed Image Comics series, Near Death.

"A fast-paced, fun read with good action and plenty of humor....Breakneck is written by Duane Swierczynski, whose writing credits for gritty crime noir comics and novels (as well as several non-fiction books) are about as long as the gams on a foxy dame."  - Lloyd Green, Pint O' Comics

"If you like your pulp with plenty of hooks and just a touch of steaminess, then Breakneck is the book for you" - Newsarama

"A thriller that lives up to its name ... races from one reveal and twist to the next towards its climax" - Bleeding Cool

“Dive straight in to a cracking read.” - Slings And Arrows
or support indie stores by buying on
Copyright © 2020 American Booksellers Association