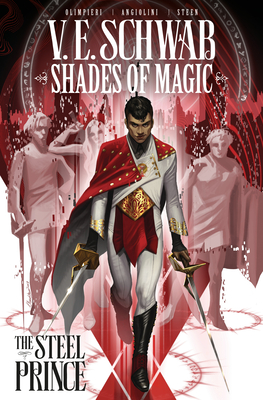 Written by #1 New York Times bestselling author V.E. Schwab and torn from the universe of the Shades of Magic sequence, this all-original comic book prequel to A Darker Shade of Magic is perfect for fans of bloody, swashbuckling adventure and gritty fantasy!

As V.E. Schwab says, "the comics are going to bridge the space between Shades of Magic and Threads of Power." Delve into the thrilling, epic tale of the young and arrogant prince Maxim Maresh, long before he became the king of Red London and adoptive father to Kell, the lead of A Darker Shade of Magic!

The youthful Maresh is sent to a violent and unmanageable port city on the Blood Coast of Verose, on strict orders from his father, King Nokil Maresh, to cut his military teeth in this lawless landscape.

There, he encounters an unruly band of soldiers, a lawless landscape, and the intoxicatingly deadly presence of the newly returned pirate queen, Arisa...

Praise For Shades Of Magic: The Steel Prince Vol. 1…

"Possibly the best fantasy comic out there right now" - Culturess

"Explosive and dramatic ... makes the lore accessible and understandable, and the art is absolutely gorgeous" - Geeks World Wide

"Full of lessons, realizations, and vibrant images, The Steel Prince adds a new layer of complexity to the Shades of Magic series" - Paperback Paris

"A masterpiece and a delight to read and admire" - DePepi

"A well realised and perfectly crafted world" - Set the Tape

"What’s not to love here? The art is stunning, the story features Prince Maxim – it’s diverse, full of daring and adventure (and plenty of magic) " - The Bookshire

"Complex and beautiful ... It is action packed and you will fly through these pages" - Book Crushin

"A dark and enjoyable endeavor in visual story-telling for V.E. Schwab and allows fans to dive back in a beloved universe in all of its colourful and mischievous glory" - Bookidote

"A prequel, but stands well on its own, with political intrigue, magic duels and even swashbuckling pirate adventures thrown in" - ICV2

"The artwork is stunning, the characters complex and compelling" - Book Riot

“Whisks the reader along a tangle of breathless action ... The Steel Prince brings Schwab’s consummate storytelling to a new medium” - Aurealis Magazine

V. E. Schwab's first adult novel, Vicious, debuted to critical praise and reader accolades. She is the author of the NYT bestselling Shades of Magic series, as well as a number of MG and YA novels, including This Savage Song. She has been called "the heir to Diana Wynne Jones." Her dynamic work has caught the attention of major TV and film studios.

Schwab has a Masters degree in Art History from the University of Edinburgh. She currently lives in Nashville, TN, but frequents Edinburgh.

Andrea Olimpieri is an up and coming comic book artist based out of
Italy. Andrea has contributed artwork to a number of titles including Dishonored, Mostri, and True Blood.
Loading...
or support indie stores by buying on