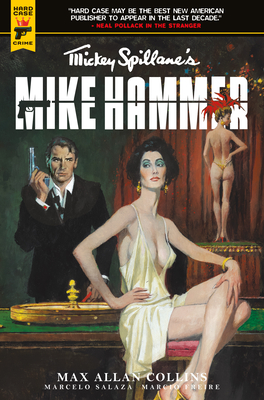 The Night I Died

When a chance encounter with a captivating femme fatale leads to a violent mob retaliation, hard-boiled detective Mike Hammer finds himself dodging both bullets and hard broads as he undertakes the most dangerous case of his career.

Praise For Mickey Spillane's Mike Hammer: The Night I Died…

"The Night I Died ticks all of the boxes when it comes to being a solid crime noir tale. It’s dark, it’s gritty, and I loved it. Fans of the genre owe it to themselves to give this one a look" - Geek Dad

"A tale full of twists, turns and double-crosses of all manners and forms. It contains virtually everything one could reasonably want and expect in a Hammer adventure" - Book Reporter

MAX ALLAN COLLINS was hailed in 2004 by Publisher's Weekly as "a new breed of writer." A frequent Mystery Writers of America nominee in both fiction and non-fiction categories, he has earned an unprecedented eighteen Private Eye Writers of America nominations, winning for his Nathan Heller novels, True Detective (1983) and Stolen Away (1991).

MARCELO SALAZA is a Brazilian comic artist. He began his career as a visual artist in 1995, doing adult comics in Brazil. After that, he worked as an illustrator for newspapers in his hometown, Rio de Janeiro. Past work includes Grimm Fairy Tales: Day of the Dead, Trancers, Empress, Logans Run and the Millarworld Annual 2017
Loading...
or support indie stores by buying on