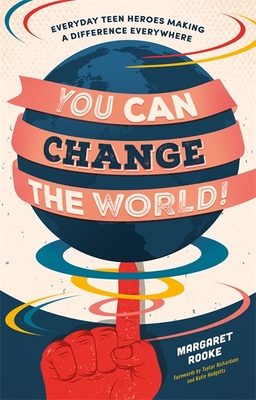 You Can Change the World! (Paperback)

This inspirational book tells the stories of more than 50 of today's teenagers who've dared to change the world they live in. It's been written to show other teens they can do the same. Bestselling author Margaret Rooke asks teens about their experiences of being volunteers, social entrepreneurs and campaigners, online and beyond. They explain how they have survived in a world often obsessed by celebrity, social media and appearance, by refusing to conform to other's expectations.

If you want to achieve against the odds and create genuine impact, this book may be the encouragement you need. The interviews cover race, sexuality, violence, grief, neurodiversity, bullying and other issues central to life today.

Read about teens from around the world including
- Trisha, 18, who has invented a way of preventing bullying online
- Dillon, 18, who takes damaged and donated clothing and upcycles it for the homeless
- Guro, 13, who persuaded a pop band to portray women differently in its video
- 'Happy D', 19, who learned to read at 14 and found ways to build his confidence
- Heraa, 19, who fights Islamophobia online.
- Ruben, 18, bullied because of Down's Syndrome, now a successful actor
- Lucy who, at 14, walked into Tesco head office and persuaded them not to sell eggs from caged hens.
- Cameron, 17, who has cerebral palsy and was side-lined by soccer teams who set up his own team 'Adversity United'
- Alex, 18, who broke his back on his 15th birthday and says his injury has taught him to care for others
- Amika, 18, who fights 'Period Poverty'
- Jesse, 15, who's seven feet tall and embraces his stature
- Billy, 18, who wore full make up every day at high school

Margaret Rooke has more than 25 years' experience writing for national newspapers, magazines and books. She has two teenage children. She is the author of the bestselling Creative, Successful Dyslexic and Dyslexia is My Superpower.
or support indie stores by buying on
Copyright © 2020 American Booksellers Association