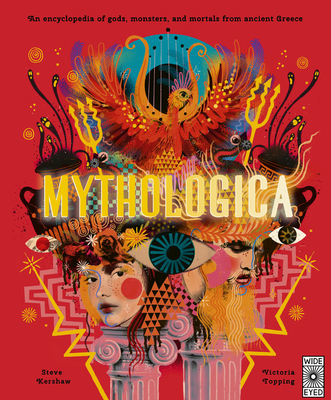 An encyclopedia of gods, monsters and mortals from ancient Greece

Amazon's No. 1 Children's Non-Fiction Book of the Year 2019 is an illustrated encyclopedia of Greek mythology like no other. Mythologica features startlingly beautiful and exquisitely otherworldly portraits of mythological characters in eye-popping color from artist Victoria Topping and authoritative text from Classics scholar and Greek mythology expert Dr. Stephen Kershaw.

Uncover the colorful lives of 50 powerful gods and goddesses, earth-dwelling mortals, and terrifying monsters as you journey back in time to ancient Greece. From the fearless Athena and her meddlesome ways to the brave and bold Odysseus and his remarkable journey home, discover why these incredible stories are still a part of our culture today.

Listed alphabetically, each boldly designed spread presents a figure from the myths, including their name in Greek, their defining attributes, and a summary of their story, along with multiple sidelights that provide additional facts. Interspersed with the profiles are summaries of famous mythological tales and historical events, like the Odyssey, the Trojan War, and the story of the Argonauts.

An electrifying visual portrayal of each figure transports you directly into their wild world. Victoria Topping’s artwork is a fusion of technological and traditional techniques that combines photography, painting, and cut-paper collage to perfectly express the blending of human and fantastic traits from which mythical beings are made.

The thrilling images and digestible text provide the perfect introduction to the lively world of Greek mythology and a beautiful display reference for the whole family. Prepare to be amazed as you uncover the epic, heroic, and sometimes terrible lives of mortals, monsters, and gods.

Victoria Topping has worked as an artist and illustrator since graduating with a BA in Illustration in 2008. She uses multiple textures and images to create her work and uses a fusion of technology and traditional techniques – often using photography, painting, gold-leafing and cut up collage which is then digitally scanned and arranged on the computer. Her work is heavily influenced by music and Victoria aims to give each piece of her artwork its own unique soul, through harnessing a blend of spirituality, culture, the cosmos and mother earth.

Stephen Kershaw wrote his PhD under Richard Buxton, arguably the leading scholar on Greek myth in the world. He has taught Classics in numerous establishments, including Oxford University Department for Continuing Education and Warwick University. He runs the European Studies Classical Tour for Rhodes College and the University of the South.


Praise For Mythologica: An encyclopedia of gods, monsters and mortals from ancient Greece…

“Mythologica: An Encyclopedia of Gods, Monsters and Mortals From Ancient Greece is sure to ignite young imaginations. Classicist Steve Kershaw chronicles the exploits of gods, goddesses and the humans with whom they become entangled in this mesmerizing volume. Brief yet detailed encyclopedic entries explain the background and notable traits of Greek mythology’s players from Athena to Zeus. Kershaw’s snapshots of these fascinating figures communicate the drama and adventure that give the myths their perennial appeal, and artist Victoria Topping’s fantastical collages create a dazzling dreamscape that suits the gods’ larger-than-life deeds. Mythologica is an outstanding introduction to ancient stories and a volume to be treasured.”
- Bookpage

“The epic, heroic and sometimes terrible lives of 50 god and goddesses, mortals and monsters, are revealed in a spectacular illustrated encyclopaedia of Ancient Greece. Each character is profiled in electrifying double page spreads, interspersed with summaries of famous tales and historical events. It’s truly a visual feast: illustrator Topping fuses technology with traditional techniques to capture the otherworldliness of her mythical subjects, employing intense colours and a hint of the surreal.”
- The Bookseller
or
Buy Here
Copyright © 2020 American Booksellers Association