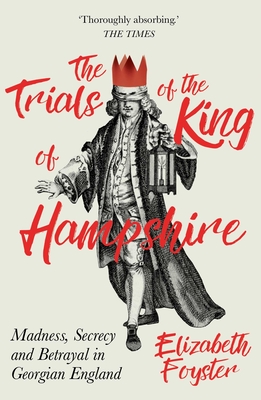 The Trials of the King of Hampshire

A Guardian best history book of 2016

Eccentric, shy aristocrat … or mad, bad and dangerous to know?

Neighbour Jane Austen found the 3rd earl of Portsmouth a model gentleman and Lord Byron maintained that, while the man was a fool, he was certainly no madman. Behind closed doors, though, Portsmouth delighted in pinching his servants so that they screamed, asked dairy-maids to bleed him with lancets and was obsessed with attending funerals. After he’d lived this way for years, in 1823 his own family set out to have him declared insane. Still reeling from the madness of King George, society could not tear itself away from what would become the longest, costliest and most controversial insanity trial in British history.

Praise For The Trials of the King of Hampshire: Madness, Secrecy and Betrayal in Georgian England…

‘Foyster proves to be not only a scrupulous and thorough historian, but also a delightfully inquisitive one…compelling.’
— Miranda Seymour, Literary Review

‘Foyster has turned a great mound of papers lying neglected in the Lambeth Palace Library into a grippingly readable tale.’
— Terry Eagleton, London Review of Books

'A highly engaging book that should reach a wide public'.
— Anne Crowther

‘A well-informed, sympathetic portrayal of an extraordinary world.’
— Guardian, Best History Books of 2016

‘Thoroughly absorbing…heading beyond the immediate confines of its subject…the 3rd earl emerges…as a Georgian “character” to rank with Beau Brummell or Parson Woodforde’.
— DJ Taylor

‘One of the early nineteenth century’s most notorious lunacy inquiries and a dynasty in turmoil...If this were a novel, no one would believe it.’
— Sarah Wise, author of Inconvenient People: Lunacy, Liberty and the Mad-Doctors in Victorian England

‘Portsmouth’s story unfolds like a novel, filled with blackmail, abductions, adultery, secret marriages, disputed inheritances and family scandals. Readers will find the book difficult to put down. There’s also a Canadian postscript to the story: Portsmouth’s widow eventually immigrated to Canada and settled in Chatham-Kent where the story of “How the Countess of Portsmouth came to Chatham” remains a fixture of haunted walks in his Ontario town.’
— Dr Carolyn Harris, University of Toronto

‘Foyster documents a family scandal ripped directly from early nineteenth-century headlines...The standing-room-only proceedings are exhaustively detailed, but equally as compelling are the stories of Wallop’s family, friends, and servants, who contributed, one way or another, to his cover-up, his exposure, and his downfall.’
— Booklist

‘Highly readable and illuminates the world Portsmouth lived in. Cameos by the family of Jane Austen and Lord Byron are an added bonus.’
— Historical Novel Society

‘Ms. Foyster did a wonderful job taking all of the information from the case and putting it into chapter form to make it easier for the layperson to understand. She really makes you look at how those with mental disorders or disabilities were treated in Georgian England and makes you wonder if it is any different than today.’
— San Francisco Book Review

Elizabeth Foyster is a Fellow and Senior College Lecturer at Clare College, Cambridge. She explores the sort of subjects that are often left out of the history books – childhood, married life, sex, relationships with siblings and parents, masculinity, old age and widowhood. She lives in Barnet, North London.
or
Not Currently Available for Direct Purchase