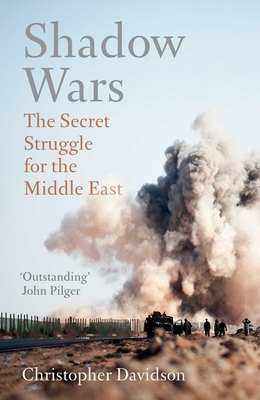 The Secret Struggle for the Middle East

In this unparalleled investigation, Christopher Davidson exposes the true extent of Western interference in the Middle East over the past one hundred years. Drawing on the examination of hundreds of leaked and declassified documents, and interviews with former officials, academics, journalists and activists, he shows how the region’s most powerful actors have been manipulated by foreign players in a game that has given rise to dictators, sectarian wars, bloody counter-revolutions and the most brutal incarnation of extremism ever seen.

Praise For Shadow Wars: The Secret Struggle for the Middle East…

‘This is an outstanding book, bracing in its understanding of the rapacious forces that set upon the Middle East and meticulous in weaving the historical threads that explain why.’
— John Pilger

‘The best and most informative book yet on the struggle for power among the US and Europe, Arab autocratic regimes, and these countries’ impoverished masses.’
— R. W. Olson, University of Kentucky, CHOICE Magazine

‘An avalanche of spies, lies, covert actions and overt aggression – Davidson shows how many of the West’s troubles in the Middle East have emerged from its relentless search for resources.’
— Leif Wenar, Professor and Chair in Philosophy and Law, King’s College London

‘A thought-provoking and original take on the present catastrophic realities in the Middle East. This is a timely research into the causes of the failure of the Arab Spring. It deems the defeat of the ‘Spring’ as a counter revolution prompted by external interventions. The book is a tour de force that begins with the past European Revolutions and ends up with an intriguing and highly convincing analysis of the demise of the Arab Spring. No one is spared in this incisive analysis: Arab regimes, fundamentalist movements, the West and Israel are all castigated here for their responsibility for the suffering of the people of Middle East today.’
— Ilan Pappe, Professor of History, University of Exeter

‘Plunges into America’s move to center stage and how it has sustained its ravenous postwar economy by preserving access to crude oil imports at any cost...Davidson is especially dogged at “following the money”—e.g., the rise of crony-capitalist networks in the Gulf monarchies and the financing of al-Qaeda and of the new Islamic State group…An exhaustively researched account.’
— Kirkus

‘For its unsparing probity, Davidson’s book ought to be required reading…Who are these people? Where did they come from? What do they want? Shadow Wars makes the answers painfully, damningly clear.’
— Christian Science Monitor

‘Mr Davidson is one of the most knowledgeable academics writing about the region.’
— The Economist

Christopher Davidson is a Reader in Middle East Politics at Durham University.
Loading...
or
Not Currently Available for Direct Purchase