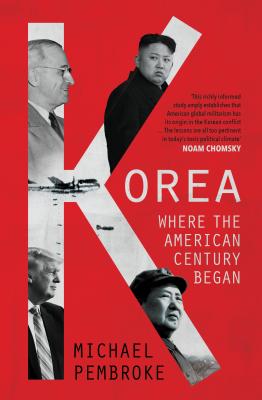 Where the American Century Began

Unless you know the history, you cannot see the future.

In late 1950, the US-led invasion of North Korea failed and for the next three years the United States bombed the North’s cities, towns and villages relentlessly. Pyongyang has been determined to develop a credible nuclear deterrent ever since.

The Korean War was the first of America’s unsuccessful military interventions post-World War II and its first modern conflict with China. It established the pattern for the next sixty years and marked the true beginning of the American century. With compassion for the people of the North and South, and understanding for the soldiers caught between the bitter winter and an implacable enemy, Michael Pembroke tells the absorbing story of Korea. It is essential reading for anyone seeking to understand why the Korean peninsula has become the nuclear flashpoint it is today.

Michael Pembroke is a writer, historian, naturalist and author of an acclaimed historical biography Arthur Phillip: Sailor, Mercenary, Governor, Spy, which was shortlisted for the Prime Minister’s Literary Awards. Since 2010 he has been a judge of the Supreme Court of New South Wales, Australia.

Praise For Korea: Where the American Century Began…

‘This richly informed study amply establishes that American global militarism has its origin in the Korean conflict… The lessons are all too pertinent in today’s toxic political climate.’
— Noam Chomsky

‘A no-holds-barred critique of US involvement in the Korean War and its subsequent policy involving Korea.’
— Kirkus

‘This is a very important book, an eye-opening one, and a wise one. I read it in one go – fascinated, educated, appalled, amazed and gripped… It lifts the lid on so many things.’
— A. C. Grayling

‘No book could be more timely or with warnings more necessary to heed, if history is not to be repeated.’
— Geoffrey Robertson QC, author of Crimes Against Humanity

‘Compulsory material for anyone who wonders how the situation on the Korean peninsula deteriorated to the point it has today.’
— Richard Broinowski, former Australian Ambassador to South Korea
or
Not Currently Available for Direct Purchase
Copyright © 2020 American Booksellers Association