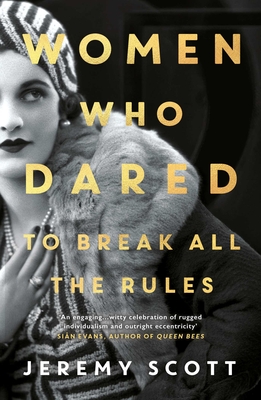 To Break All the Rules

Victoria Woodhull, Mary Wollstonecraft, Aimee Semple McPherson, Edwina Mountbatten, Margaret Argyll and Chanel were all women who dared. They had no time for what society said they could and couldn’t do and would see the world bend before they did.

In 1872 a mesmerising psychic named Victoria Woodhull shattered tradition by running for the White House. Had she won the ensuing spectacle would surely have rivalled that of our own era. Abhorring such flamboyance, Mary Wollstonecraft inspired a revolution of thought with her pen as she issued women’s first manifesto – still to be fulfilled.

From Aimee Semple McPherson, the first female preacher in America, to Coco Chanel, designer of an empire, these women became the change they wanted to see in society.

In Women Who Dared, Jeremy Scott pays tribute to them all with wit, verve and reverence.

Praise For Women Who Dared: To Break All the Rules…

‘With an adman’s flair for what’s bold and flashy [Scott] speeds the reader through the lives of his extraordinary subjects.’
— Sunday Times

‘There are some great stories along the way, and Scott tells them with verve.’
— New York Times

‘Hugely enjoyable and a sparkling addition to the genre.’
— Katie Hickman, author of Daughters of Britannia and Courtesans

‘Simultaneously an exuberant celebration of lives lived at full throttle, and a collection of cautionary tales… an engaging and often witty celebration of rugged individualism and outright eccentricity.’
— Siân Evans, author of Queen Bees

‘Bold, raunchy, and colorful, Scott’s book reveals what the history books leave out, including intimate details of the hidden and public scandals that marked the lives of these outspoken women, and honors them for their courage, determination, and commitment to change.’
— Foreword Reviews

‘He writes with verve…his fascination with his subjects is infectious.’
— Kirkus

‘Jeremy Scott, a man who clearly loves women, is awed by the exploits of these outrageous rule breakers. Me too. It’s a great read.’
— Marcelle d’Argy Smith

Jeremy Scott became a full-time writer following a colourful career in advertising, as described in his acclaimed memoir Fast and Louche. He is the author of Dancing on Ice, Show Me a Hero, The Irresistible Mr Wrong and Coke: The Biography. He lives in Chelsea, London.
Loading...
or
Not Currently Available for Direct Purchase