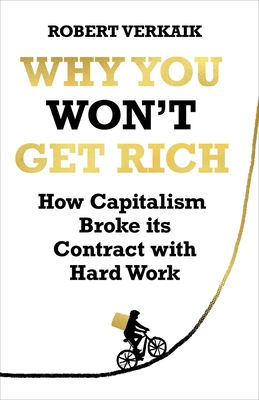 Why You Won't Get Rich

How Capitalism Broke its Contract with Hard Work

From the bottom to the top of our economy, capitalism is too blunt an instrument to tackle Britain's epidemic of inequality.

Even those higher up the ladder are losing their grip on the life they were promised. Barristers take home less than the minimum wage and doctors are starting out with £100,000 student debts on salaries lower than the national average. We’re all facing a new economic phenomenon – in-work poverty. At the same time a generation of young professionals is coming to terms with never being able to own even the cheapest home in their area.

The only way to reverse the damage is by giving everyone a financial stake in society.

Praise For Why You Won't Get Rich: How Capitalism Broke its Contract with Hard Work…

‘How the system became rigged so that even the fortunate lose out: a masterpiece.’
— Danny Dorling, author of Inequality and the 1%

‘The latest in the series of powerful books on the divisions in modern Britain, and will take its place on many bookshelves beside Reni Eddo-Lodge’s Why I’m No Longer Talking to White People About Race and Owen Jones’s Chavs.’
— Andrew Marr, Sunday Times on Posh Boys

Robert Verkaik is the author of Posh Boys: How the English Public Schools Ruin Britain and Jihadi John: the Making of a Terrorist. He writes for the Guardian, Independent, the i, Observer, Sunday Telegraph, Tortoise and Sunday Times. His reporting was longlisted for the Orwell Prize in 2010 and he was a runner-up in the specialist journalist category at the 2013 National Press Awards. Robert is also a volunteer adviser with Citizens Advice.
Loading...
or support indie stores by buying on