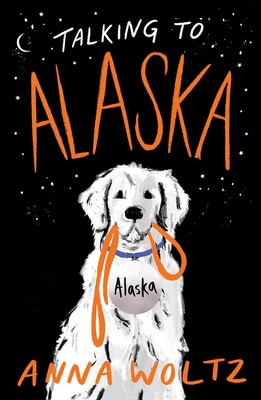 It only takes one day at their new school for Parker and Sven to become mortal enemies. Parker's had a terrible summer and just wants to be invisible, while Sven is desperate to make an impression and be known as anything other than "that boy with epilepsy."

When Parker discovers her beloved dog Alaska – who she had to give away last year – now belongs to Sven, she's determined to steal Alaska back. Of course, that's easier said than done...

Praise For Talking to Alaska…

‘Parker and Sven can't stand each other but I loved them both from the very first page. Feisty and believable, both vulnerable in different ways, they are linked together by Alaska, Parker's beloved dog who, she discovers, now belongs to Sven. Themes of friendship, loneliness, damage and privacy are woven into a tense story with characters that jump off the page, this will be an unmissable debut in the UK.’
— Jill Coleman, Director of Children's Books, BookTrust

‘From the start Alaska caught me with its unclichéd voices. It has two strikingly engaging young protagonists: the boy determined to be known for something other than his epilepsy and the outsider girl in mourning for her lost dog. Original in both the prose and the characterisation, this friendship drama and mystery story is a cut above.’
— Nicolette Jones, BookTrust judge

‘From the very first pages you are invested in the main characters. Big issues are dealt with in a sensitive accessible way and the story moves at a terrific pace. Highly recommended.’
— Simon Key, BookTrust judge

‘This is a riveting story with an intricate plot, wonderfully told. Epilepsy… is very sensitively handled. Adolescent surges of feelings such as loyalty, anger and love are skilfully integrated into the plot. The translator, Laura Watkinson, deserves special thanks for bringing her considerable skill to making this story accessible to an English audience.’
— School Librarian

'For animal-loving readers, the fluffy white dog may be reason enough to add this to collections, but the deeper layers of story make it a must.'
— Booklist, starred review

'As heart-warming as it is thought-provoking… Woltz plants the reader squarely in the characters' shoes, making themes of understanding, hurt, friendship and privacy feel deeply personal. Laura Watkinson's translation into English deserves a special mention too.'
— SchoolNotices

Anna Woltz is an internationally bestselling children's author based in the Netherlands. She has written 24 books for young readers, which have been translated into twenty-one languages and won numerous prizes. Talking to Alaska won one of the most prestigious literary prizes for Dutch children's books, the Zilveren Griffel.
Loading...
or support indie stores by buying on