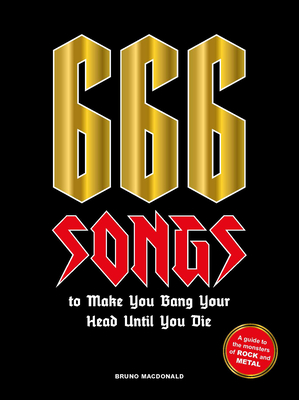 666 Songs to Make You Bang Your Head Until You Die

A Guide to the Monsters of Rock and Metal

Featuring 666 standout metal songs from 1960 to the present day and illustrated with sleeves, flyers, posters and magazine ads, this is a feast for fans who love it loud.

666 Songs to Make You Bang Your Head Until You Die delves into the dark corners of hard rock and metal, unearthing hidden treasures and shining fresh light on old favourites.

From pioneers like Black Sabbath and Led Zeppelin, through million-sellers like Van Halen and AC/DC, to skull-crushers like Pantera and The Prodigy, and young bucks like Bring Me The Horizon and Paramore, the selection charts the evolution of the genre over the last 60 years. Each entry is packed with reviews from contemporary musicians, quotes from bandmates and fascinating trivia.

Written in an informed, entertaining and irreverent style, 666 Songs to Make You Bang Your Head Until You Die is a must-have for metal lovers.

Praise For 666 Songs to Make You Bang Your Head Until You Die: A Guide to the Monsters of Rock and Metal…

"Highlighting subgenres and musicians worldwide, this volume demonstrates the depth and breadth of heavy metal, with songs ranging from Link Wray and His Ray Men's "Rumble" and Metallica's "Fade to Black" to Prince's "Let's Go Crazy" and My Chemical Romance's "Welcome to the Black Parade." Loud, vicious, crashing, and turbocharged are among the descriptions, often quoted from music critics or fellow and rival band members. MacDonald (Air Guitar: A User's Guide) includes about four songs per page, with color photos of an album cover or a record label. Pithy write-ups pack facts, occasional four-letter exclamations, and gossipy asides into the 100 or so words allotted to each song. VERDICT: A quick browse; sure to be a hit with metal fans looking to confirm their favorites or expand their listening repertoire." Library Journal

Bruno MacDonald is an author, writer, and editor. 1001 Albums You Must Hear Before You Die, The Rough Guide to Rock, and The Rolling Stones 50, the official fiftieth anniversary book, are among the skeletons in his literary closet. When not rocking and rolling, he works for an animal rescue organization in South Africa.
Loading...
or
Not Currently Available for Direct Purchase