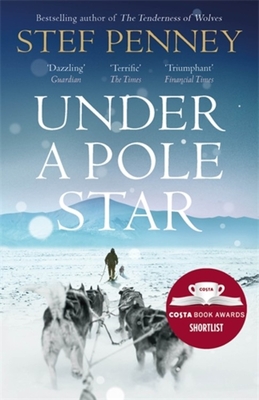 Under a Pole Star

Sometimes you have to travel to the farthest edge of the world in order to find your true place in it...
A panoramic historical epic and an unforgettable love story from the author of The Tenderness of Wolves, for fans of Kristin Hannah, Sarah Perry, and Barbara Kingsolver
A whaler's daughter, Flora Mackie first crossed the Arctic Circle at the age of twelve. Years later, in 1892, determination and chance lead her back to northern Greenland as a scientist at the head of a British expedition, defying the expectations of those who believe a woman has no place in that harsh world.
Geologist Jakob de Beyn was raised in Manhattan. Yearning for wider horizons, he joins a rival expedition. Jakob and Flora's paths cross. It is a fateful meeting, where passion and ambition collide and an irresistible attraction is born.

The violent extremes of the north obsess them both: perpetual night and endless day; frozen seas and coastal meadows, and the strange, maddening pull it exerts on the people trying to make their mark on its vast expanses - a pursuit of glory whose outcome will reverberate for years to come.
"The contrast of the lovers' blazing relationship set against the frigid Arctic and the secrets that propel the narrative will keep readers riveted in this hard-to-forget, mesmerizing tale!" --M.J. Rose, New York Times bestselling author


Praise For Under a Pole Star…

"Penney's prose is rapturous, whether she is describing the 'overwhelmingly rich--glorious and unnecessary' landscape, or in her detailed and richly imagined passages on the attraction and intimacy between Flora and Jakob. By telling their story through recollection and the letters that they send, Penney imparts an additional layer of suspense, with neither the reader nor the characters knowing what may come, resulting in an exciting and transportive novel."
—Publishers Weekly

"A fascinating, mysterious historical novel about a female explorer in a world of men at the end of the nineteenth century. Under a Pole Star is an adventure, an illicit romance, and a life-defying exploration of a land most of us know nothing about. The contrast of the lovers' blazing relationship set against the frigid Arctic and the secrets that propel the narrative will keep readers riveted in this hard-to-forget, mesmerizing tale!"
— M.J. Rose, New York Times bestselling author

"Serious issues like gender bias and exploitation are adeptly handled, and the icy Arctic setting comes alive in passages of shimmering beauty . . . An exceptional epic about an unconventional woman's life and loves."
—Booklist (Starred Review)

"Penney does a masterly job of melding Flora's story with the more factual accounts of polar expeditions, and many of her characters are taken from the pages of history . . . A gripping tale about the men and women who were driven to conquer the Arctic. Bound to appeal to admirers of Eowyn Ivey's To the Bright Edge of the World."—Library Journal (Starred Review)

"Penney makes it clear that whatever their flaws, these early explorers, even the least likable and most desperate, had dreams and courage and a mystical pull toward the north that was almost as strong as the magnetism of the Pole itself. That's the true heart of this immersive novel. If you are fond of boundary-shattering journeys--geographical, sexual, and scientific--you'll have a great ride."
— The Bookreporter

"A panoramic historical epic and an unforgettable love story from the author of the Costa-winning The Tenderness of Wolves, for fans of Sarah Perry, Jessie Burton, and Donna Tartt."— Princeton Book Review

"What has marked Penney out from the start is her ability to make her extensive historical research come alive."—Sunday Herald

"With the nights drawing in and the temperature beginning to plummet, there's no better time to curl up with this stunningly evocative tale about an intrepid young female explorer. As immersive as it is mesmerizing, this is a novel that you won't ever forget."—Heat

"This is an epic love story set against the forbidding beauty of snow meadows. A perfect winter read."—Red

"A terrific and beautifully written yarn that will make readers yearn to travel and fall in love in a cold climate."—The Times

"Penney works hard to fill her canvas with color and conviction."—The Sunday Times

"A classic Bildungsroman . . . Penney explores themes of love, desire, companionship, and the difference between the three."—Times Literary Supplement

"Against the backdrop of the Arctic Ocean, explorer Flora meets Jakob, a member of a rival expedition. Science gives way to love with devastating results."—Grazia

"A most interesting tale of Inuit history and the rivalry between Arctic explorers with just a touch of romance. Penney brings to life this realistic, enjoyable story of reconnoitering the Arctic and of women's issues in the late 1800s."—Karen Bakshoian, Letterpress Books

"Nobody does cold as well as Stef Penney! Her latest book chronicles exploration in the Arctic Circle, where the frigid weather was in stark contrast with the passions of explorers in search of knowledge, adventure, the North Pole, and fame."—Sally Wizik Willis, Beagle and Wolf Books & Bindery

"This is what you want from Grade A-plus historical fiction: well-examined characters, a little gore; a feeling of modernity; a hearty well of research; and my favorite, a terrific woman scientist who has guts and foibles and isn't your perfect English rose. It's one of those cereal books (my own coinage, i.e., a book you have to eat cereal while you read it because you can't put it down long enough to cook)."—Erica Eisdorfer, Flyleaf Books

"This novel of a woman's quest to be first into this harsh environment blends fierce feelings, rivalries, and secrets. Stef has given us an amazing description of what makes an explorer explore and how they endure. This is a novel of adventure, love, and challenge. Have a blanket nearby as the cold will reach out to you as you join these expeditions and get into this great read."—Gloria Tiller, Kazoo Books

"Under A Pole Star is fascinating, and every scene is utterly captivating; Penney's descriptions seem so real it is like you are there! I loved this book."—Cheryl Kravetz, Classic Bookshop

"Give me a book with snow in it! Penney's excellent descriptions of the blinding cold and dark winter nights set the stage for the explorers and scientists who sought new discoveries. I loved the adventure and the people involved."—Becci West, Rainy Day Books

"With clear, bright prose, Stef Penney unlocks a world that is sensual, absorbing, and full of vivid characters and places. Under A Pole Star is everything you want a novel to be--it carries you along smoothly and quickly, and it lingers with you after you've finished."—Kate Morning, Magers & Quinn Booksellers

"Those fortunate enough to read Under A Pole Star will experience an intensity of adventure coupled with equally compelling descriptions of the vast and varied landscape. Penney's details of exploration and survival are a thrill. The scattering of Inuit words (glossary is lovely) transports the reader to a place and time--the golden age of exploration showcasing the men and women who were driven to conquer the Atlantic. To think of one so young, so vulnerable taking on the largest island in the world! Adventure at its finest with strong historical merit to boot."—Cynthia Callander, Vero Beach Book Center

Praise for The Tenderness of Wolves
"A suspenseful epic, offering a leitmotif of constant unease . . . impressive."—The Guardian

"Penney's absorbing, quietly convincing narrative illuminates the characters, each a kind of outcast, through whose complex viewpoints this dense, many-layered story is told."—Publishers Weekly (Starred Review)

"A first-rate gripper with a notably sensual as well as psychological understanding of its main characters."—Globe and Mail

Stef Penney is a screenwriter and the author of three acclaimed novels: The Tenderness of Wolves, The Invisible Ones, and Under a Pole Star. The Tenderness of Wolves won the Costa Prize for Book of the Year, Theakston's Crime Novel of the Year, and was translated into thirty languages. She grew up in Edinburgh.
Loading...
or
Not Currently Available for Direct Purchase