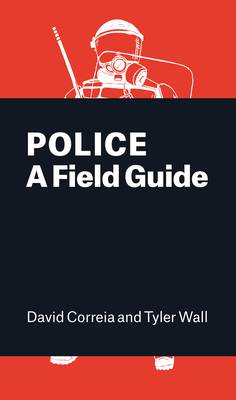 Police: A Field Guide is an illustrated handbook to the methods, mythologies, and history that animate today’s police. It is a survival manual for encounters with cops and police logic, whether it arrives in the shape of “officer friendly,” “Tasers,” “curfews,” “non-compliance,” or reformist discourses about so-called “bad apples.” In a series of short chapters, each focusing on a single term, such as “the beat,” “order,” “badge,” “throw-down weapon,” and much more, authors David Correia and Tyler Wall present a guide that reinvents and demystifies the language of policing in order to better prepare activists—and anyone with an open mind—on one of the key issues of our time: police brutality. In doing so, they begin to chart a future free of this violence—and of police.

Praise For Police: A Field Guide…

“Seeing through police bluewashing at every turn, Correia and Wall have put together a comprehensive, rigorous and highly useful guide to understanding ‘copspeak.’ Unpacking the structural violence and racism of the police, and their functional role in capitalism, as well as in the historical continuity of slavery, Police: A Field Guide is a resolutely practical guide to thinking of a world beyond the police. Of value to activists and theorists alike, this text is a careful analysis of core concepts in policing of use to everyone committed to ending racist state violence and the tyranny of cops everywhere.”
—Nina Power, author of One-Dimensional Woman

“Police: A Field Guide is a dictionary of liberation, an antidote to the ‘copspeak’ that’s everywhere, even in our own heads. By dissecting and analyzing a vocabulary of power that has become dangerously ubiquitous, this book can help us dispel and loosen its grip.”
—Astra Taylor, author of The People’s Platform: Taking Back Power and Culture in the Digital Age

“One of the angriest and saddest indictments of American policing I have ever read. The exposure of ‘copspeak’ is masterly and the analysis of the relationships between law and order, racism and capitalism, are explained with surgical precision.”
—Clive Bloom, author of Riot City: Protest and Rebellion in the Capital

David Correia is an Associate Professor in the Department of American Studies at the University of New Mexico. He is the author of Properties of Violence: Law and Land Grant Struggle in Northern New Mexico.

Tyler Wall is an Assistant Professor in the Department of Sociology at the University of Tennessee.
Loading...
or support indie stores by buying on
(This book is on backorder)