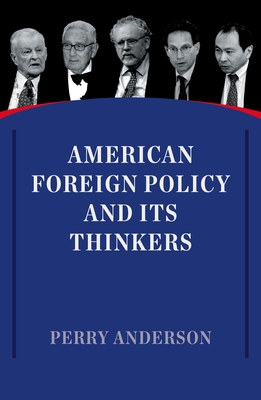 Since the birth of the nation, impulses of empire have been close to the heart of the United States. How these urges interact with the way the country understands itself, and the nature of the divergent interests at work in the unfolding of American foreign policy, is a subject much debated and still obscure. In a fresh look at the topic, Anderson charts the intertwined historical development of America’s imperial reach and its role as the general guarantor of capital.

The internal tensions that have arisen are traced from the closing stages of the Second World War through the Cold War to the War on Terror. Despite the defeat and elimination of the USSR, the planetary structures for warfare and surveillance have not been retracted but extended. Anderson ends with a survey of the repertoire of US grand strategy, as its leading thinkers—Brzezinski, Mead, Kagan, Fukuyama, Mandelbaum, Ikenberry, Art and others—grapple with the tasks and predicaments of the American imperium today.

“Like everything Anderson writes, American Foreign Policy and Its Thinkers deserves careful reading. He’s one of the world’s great historians, unrivalled in his ability to master and synthesize vast historical literatures (often drawing on many languages).”
—Jeet Heer, New Republic

“The most interesting implication of Anderson’s argument is that the long catalog of US foreign policy disasters—the overthrow of Mohammad Mossadegh in Iran in 1953, the Bay of Pigs fiasco in 1961, the twin quagmires of Vietnam and Iraq—were more than just errors of presidential judgement. They were the price America recurrently pays for the hubristic embrace of a messianic foreign policy, one that never disciplined its priorities according to rationally defined national interests.”
—New York Review of Books

“Let me first get the superlatives out of the way. What we have here are two essays of extraordinary originality and penetrating insight. Sweeping, subtle, sophisticated, provocative, pungently written: all of the above apply.”
—Andrew Bacevich, Diplomatic History

“American Foreign Policy and Its Thinkers plunges into the contemporary American dreamworld of empire. Anderson has always been attracted to those who speak of the world without euphemism, and he appraises the recent offerings of American ‘Grand Strategists’ with sardonic respect, however rabid or fantastic their conceptions.”
—London Review of Books

“His writing is sharp and erudite and even those who do not share his politics will learn from his book.”
—Gideon Rachman, Financial Times (“Summer Books 2015”)

“Anderson surveys the views of some of the most prominent mainstream American foreign policy intellectuals and finds them not only unconvincing but also incoherent.”
—Eric Alterman, Nation

Perry Anderson is the author of, among other books, Spectrum; Lineages of the Absolutist State; Passages from Antiquity to Feudalism; Considerations on Western Marxism; English Questions; The Origins of Postmodernity; The New Old World; and The Indian Ideology. He teaches history at UCLA and is on the editorial board of New Left Review.
Loading...
or
Not Currently Available for Direct Purchase