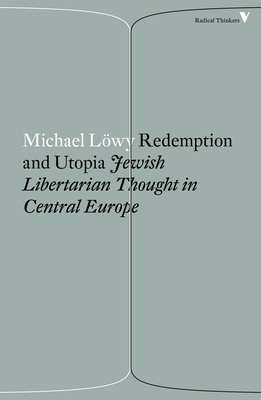 Towards the end of the nineteenth century, there appeared in Central Europe a generation of Jewish intellectuals whose work was to transform modern culture. Drawing at once on the traditions of German Romanticism and Jewish messianism, their thought was organized around the cabalistic idea of the “tikkoun”: redemption. Redemption and Utopia uses the concept of “elective affinity” to explain the surprising community of spirit that existed between redemptive messianic religious thought and the wide variety of radical secular utopian beliefs held by this important group of intellectuals. The author outlines the circumstances that produced this unusual combination of religious and non-religious thought and illuminates the common assumptions that united such seemingly disparate figures as Martin Buber, Franz Kafka, Walter Benjamin and Georg Lukács.

“Löwy explores in this remarkable study … a generation of Central European Jewish intellectuals of an antiauthoritarian political orientation who left a considerable mark on twentieth-century radical thought … As Löwy’s subtle and profound book reminds us, their legacy is a rich one.”
—American Historical Review

Michael Löwy is Research Director of Sociology at the Centre national de la recherché scientifique, Paris. He is the author of numerous books, including The War of the Gods: Religion and Politics in Latin America and Fire Alarm: Reading Walter Benjamin’s “On the Concept of History.”
Loading...
or
Not Currently Available for Direct Purchase