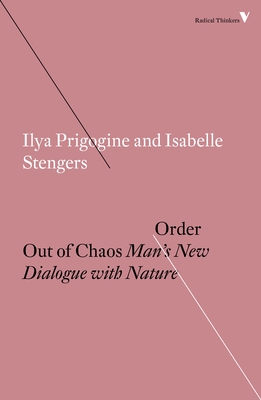 Order Out of Chaos (Paperback)

A pioneering book that shows how the two great themes of classic science, order and chaos, are being reconciled in a new and unexpected synthesis

Order Out of Chaos is a sweeping critique of the discordant landscape of modern scientific knowledge. In this landmark book, Nobel Laureate Ilya Prigogine and acclaimed philosopher Isabelle Stengers offer an exciting and accessible account of the philosophical implications of thermodynamics. Prigogine and Stengers bring contradictory philosophies of time and chance into a novel and ambitious synthesis. Since its first publication in France in 1978, this book has sparked debate among physicists, philosophers, literary critics and historians.

Isabelle Stengers is a professor of philosophy at the Université Libre de Bruxelles. Her publications include Cosmopolitics. She received the Grand Prize for Philosophy from the Académie Française in 1993.

Ilya Prigogine (1917–2003) was a Belgian physical chemist noted for his work on dissipative structures, complex systems and irreversibility. He was awarded the Nobel Prize for Chemistry in 1977.

Praise For Order Out of Chaos: Man's New Dialogue with Nature (Radical Thinkers)…

“A passionate meditation on Man and Universe.”
—Italo Calvino

“An ambitious book which suggests that a new picture of the universe is emerging from the study of thermodynamics, and that this picture will heal the breach between the scientific and the poetic view of man.”
—John Maynard Smith, London Review of Books