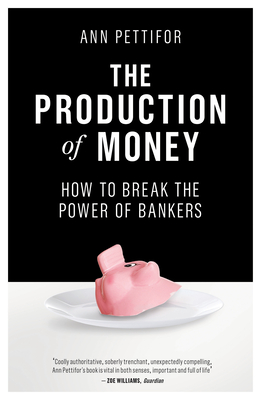 The Production of Money

How to Break the Power of Bankers

What is money, where does it come from, and who controls it?

In this accessible, brilliantly argued book, leading political economist Ann Pettifor explains in straightforward terms history’s most misunderstood invention: the money system. Pettifor argues that democracies can, and indeed must, reclaim control over money production and restrain the out-of-control finance sector so that it serves the interests of society, as well as the needs of the ecosystem.

The Production of Money examines and assesses popular alternative debates on, and innovations in, money, such as “green QE” and “helicopter money.” She sets out the possibility of linking the money in our pockets (or on our smartphones) to the improvements we want to see in the world around us.

Praise For The Production of Money: How to Break the Power of Bankers…

“Ann Pettifor was always the ideal author of a book that shatters the fantasy of apolitical money and the toxic myth that monetary policy must remain a democracy-free zone. This book is now a reality.”
—Yanis Varoufakis, author of And the Weak Suffer What they Must?

“Pettifor has a splendidly clear vision, both of money creation and of the role of banks. There is a great deal to applaud here, including her critique of mainstream economic models, which continue to ignore money and banking or, alternatively, get that horribly wrong.”
—Charles Goodhart, Emeritus Professor, London School of Economics

“Pettifor’s new book aims to elucidate the nature of money, the better to help women advocate for their needs.”
—Maya Singer, Vogue

“Ann deserves a lot of credit because she was trying to highlight these issues many, many years ago, and unfortunately, there weren’t enough people who were trying to map the system, model it, and then above all else, modify it. We have to map the financial system and then work out how to change it.”
—Gillian Tett, author of The Silo Effect

“Our livelihoods and ecosystem are deeply affected by the world of money production and finance. But it’s a world largely hidden from us by vested interests. In language we can all understand, Ann Pettifor explains the issues and the debates around money, shadow banking, QE and ‘helicopter money.’ A must-read.”
—Caroline Lucas, Co-Leader of The Green Party of England and Wales

“Enlightening. She is unafraid to square up to the mainstream economists who stand ‘aloof’ from the financial system.”
—Independent

“Pettifor has a gift for breaking down complex economic ideas into notions that feel almost intuitive. If her book cannot hope to wholly democratize money, it could certainly help democratize the understanding of it, which Pettifor sees as the first step to encouraging public demands for a fairer system.”
—Bookforum

Ann Pettifor is the Director of Prime (Policy Research in Macroeconomics), an Honorary Research Fellow at City University, and a Fellow of the New Economics Foundation. She has an honorary doctorate from Newcastle University.

She is known for her leadership of the Jubilee 2000 campaign, which resulted in massive debt cancellation for more than thirty countries. She has served on the board of the UN Development Report and in 2015 was invited onto the economic advisory board of the British Labour Party by Jeremy Corbyn. She is the author of The Real World Economic Outlook and The Coming First World Debt Crisis and co-author of The Green New Deal and The Economic Consequences of Mr Osborne.
Loading...
or
Not Currently Available for Direct Purchase