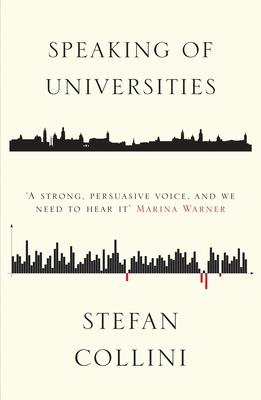 A devastating analysis of what is happening to our academia

In recent decades there has been an immense global surge in the numbers both of universities and of students. In the UK alone there are now over 140 institutions teaching more subjects to nearly 2.5 million students. New technology offers new ways of learning and teaching. Globalization forces institutions to consider a new economic horizon. At the same time governments have systematically imposed new procedures regulating funding, governance, and assessment. Universities are being forced to behave more like business enterprises in a commercial marketplace than centres of learning.

In Speaking of Universities, historian and critic Stefan Collini analyses these changes and challenges the assumptions of policy-makers and commentators. He asks: does “marketization” threaten to destroy what we most value about education; does this new era of “accountability” distort what it purports to measure; and who does the modern university belong to? Responding to recent policies and their underlying ideology, the book is a call to “focus on what is actually happening and the clichés behind which it hides; an incitement to think again, think more clearly, and then to press for something better.”

Stefan Collini is Professor Emeritus of Intellectual History and English Literature at Cambridge University and Fellow of the British Academy. He is a frequent contributor to the London Review of Books, Times Literary Supplement, Guardian, and the Nation, and he has been described by a reviewer as “one of Britain’s finest essayists and writers.” Other works include Common Writing: Essays on Literary Culture and Public Debate, What Are Universities For?, Absent Minds: Intellectuals in Britain, and English Pasts: Essays in History and Culture.

Praise For Speaking of Universities…

“Stefan Collini has uncommon lucidity, stamina, and unparalleled generosity in reading, on our behalf, the hugely verbose and obfuscating documents that convey and impose government policy. His patient form of reasoning in public, while it may seem to be overlooked, has very likely acted, like flood defences under ground, to forestall even worse developments here in the UK. His is a strong, persuasive voice, and we need to hear it.”
—Marina Warner

“Stefan Collini pulls back the curtain on the vacuous management-speak of the modern university. ‘Accountability’ and ‘efficiency’ are smokescreens for the sale of degrees, the creation of debt, and lower quality teaching dressed up as ‘excellence.’ Any student who wants to understand what has happened to their university needs to read this book. Any parent who wants to know what lies behind the adverts for securing their child’s future might also be interested in what the words in the seller’s prospectus actually mean and why they are now there.”
—Danny Dorling, author of Inequality and the 1%

“It is only through the consistent speech of dissident voices like Stefan Collini that we have any hope of remaking the university as a place defined by academic judgment and thought.”
—Los Angeles Review of Books

“[Speaking of Universities] is a profound treatment of the place (or plight) of higher education in the 21st-century neoliberal state. It is recommended reading for anyone concerned with the future of the university.”
—Sewanee Review

“There is far too much wit and wisdom in Speaking of Universities to fit in a review. It is full of stuff that is shockingly true about the corporate tide in universities, and that has long been hiding in full view.”
—Australian Review of Books

“This book is a timely wake-up call. The message is loud and clear: No Sir! Higher education is NOT a marketable commodity.”
—Pravin J. Patel, Journal of Educational Planning and Administration
or
Not Currently Available for Direct Purchase
Copyright © 2020 American Booksellers Association