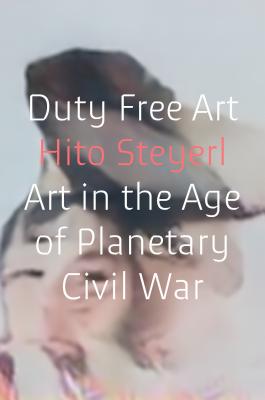 Art in the Age of Planetary Civil War

What is the function of art in the era of digital globalization?

How can one think of art institutions in an age defined by planetary civil war, growing inequality, and proprietary digital technology? The boundaries of such institutions have grown fuzzy. They extend from a region where the audience is pumped for tweets to a future of “neurocurating,” in which paintings surveil their audience via facial recognition and eye tracking to assess their popularity and to scan for suspicious activity.

In Duty Free Art, filmmaker and writer Hito Steyerl wonders how we can appreciate, or even make art, in the present age.

What can we do when arms manufacturers sponsor museums, and some of the world’s most valuable artworks are used as currency in a global futures market detached from productive work? Can we distinguish between information, fake news, and the digital white noise that bombards our everyday lives? Exploring subjects as diverse as video games, WikiLeaks files, the proliferation of freeports, and political actions, she exposes the paradoxes within globalization, political economies, visual culture, and the status of art production.


Praise For Duty Free Art: Art in the Age of Planetary Civil War…

“Steyerl refuses to nail down a single idea or insist on a point of view. Instead, we get art—her video—as an act of moral thinking-in-progress. In a very of-the-moment, digital-age way, the logic of that thinking is fractured, the nature of morality suspect. But a belief in the necessity of thinking, restlessly, politically, never is in doubt.”
—New York Times

“The highest duty of theory and art is to grasp and articulate their own time. In our time Hito Steyerl fulfills this duty as nobody else. Her investigations of the fate of images and words in the age of their global circulation are always focused and precise−but also adventurous, unexpected and fascinating.”
—Boris Groys

“Faced with a world lacking the stable ground necessary to base proper metaphysical claims or foundational political myths, one populated by questionable images, institutions and identities, Steyerl’s practice—her example—retains a clear message: agency is still possible; one can still act, if only to needle and pick at representations in order to expose the conditions of manipulation, exploitation and affect underlying their appearance.”
—Art Review

“Steyerl’s art is extremely rich, dense and rewarding … With Steyerl, you can’t always tell fact from fabulation, where the jokes end and seriousness begins, what is truth and what is a lie. A pleasure in art can unhinge us in everyday life, where we are undone by falsehoods at every turn.”
—Adrian Searle, Guardian

“Hito Steyerl’s nuanced essays dissect the buckshot of digital information streams. And as her own art work engages all those digital filters and proxies that scramble and reassemble and generate noise, she also rehearses another way of thinking or recognizing or laughing.”
—Keller Easterling, author of Extrastatecraft

“Page by page, line by line, and phrase by phrase, Duty Free Art is a real and disquieting treasure.”
—Andy Battaglia, Art News

“Steyerl emerges as a critic in the tradition of Georg Simmel and Sigfried Kracauer, thinkers whom she credits with analyzing the surfaces of modernity not as superficial epiphenomena or ‘mere appearances’ but as its condensation and substance.”
—Chloe Wyma, Brooklyn Rail

“[Steyerl] gleefully surfs everything from military 3-D imaging and printing to big data and corporate surveillance to computer gaming, finding in disparate events and phenomena the fingerprints of a neoliberal media order in which the old modernist notion of autonomy now refers to machines that communicate in codes.”
—Saul Anton,Artforum

“Brace yourselves. Steyerl blasts away at the cultural structures that underlie the art world … [and] rattles all aesthetic complacency.”
—Anne Higonnet,Public Books

“Steyerl moves from granular questions of code and data to more nebulous paradoxes and incongruities, critically interrogating the art world she uneasily inhabits in relation to contradictions in technology, politics and visual culture at large.”
—Jesse Cumming,Prefix ICA Magazine

Hito Steyerl is one of the leading artists working in video today. Her work explores the divisions between art, philosophy, and politics. She has had solo exhibitions at, among others, MOCA, LA; the Reina Sofia, Madrid; and the ICA, London. She has participated in the Venice Biennale, Shanghai Biennale, Documenta, and Manifesta. Her work is in the permanent collection of the Tate Modern. She is the author of The Wretched of the Screen and writes in numerous periodicals. She is currently a Professor of New Media Art at the Berlin University of the Arts.