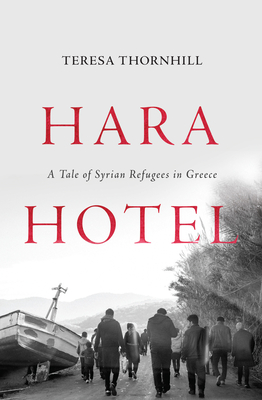 A Tale of Syrian Refugees in Greece

Syrian Kurd Juwan Azad left his home and family in Damascus in 2011 to flee military service under the al-Assad regime. After several troubled years as a refugee in Turkey, he arrived in Greece by sea, on the route taken by hundreds of thousands of his fellow Syrians seeking a safe haven in Europe. But as borders closed across the Balkans in early 2016, Juwan and his fellow Syrians found themselves blocked from travelling any further.

Teresa Thornhill volunteered at Hara Hotel, a makeshift camp on the Greece–Macedonia border. An Arabic speaker, she met Syrians from all walks of life as she distributed clothing and organized activities for children. One of the Syrians was Juwan, who would later walk through the mountains of Macedonia to safety in Austria.

In Hara Hotel, Thornhill interweaves a narrative of daily life at the camp with Juwan’s extraordinary story, the recent history of the revolution in Syria, and an account of the ensuing civil war, painting a vivid picture of the predicament of Syrians trapped on Europe’s borders.


Praise For Hara Hotel: A Tale of Syrian Refugees in Greece…

“The intimate, deeply felt account of a volunteer who worked with Syrians during the years they were stranded in Greece, which, unlike so many stories of the refugee crisis, does not shy away from speaking about the forces that tore those refugees from their homes.”
—Molly Crabapple, author of Drawing Blood

“A vivid first-hand account of Europe’s failure to protect the refugees at its borders, and a tale of solidarity that points to how things could be different in future.”
—Daniel Trilling, author of Bloody Nasty People

“Eminently readable … The author’s humanity jumps out on every page. She tells both the very human stories of individual refugees, and through them, the story of the disintegration of Syria that has led them to flee. Strongly recommended!”
—Professor Richard Black, Pro-Director (Research & Enterprise), SOAS

“Thornhill overlays the wrenching refugee sagas with her personal quest to understand why Syria began its alarming unraveling in 2011. What she learned … will certainly enlighten casual followers of that nation’s bloodshed. A brave, affecting book about a continuing humanitarian crisis.”
—Kirkus

Teresa Thornhill is a linguist, writer and child protection barrister with a special interest in the Middle East. She holds a Masters degree in Middle Eastern Studies from SOAS. Her previous publications include Sweet Tea with Cardamom: A journey through Iraqi Kurdistan; The Curtain Maker of Beirut: Conversations with the Lebanese and Making Women Talk: the Interrogation of Palestinian Women Prisoners by the Israeli General Security Services.
Loading...
or
Not Currently Available for Direct Purchase