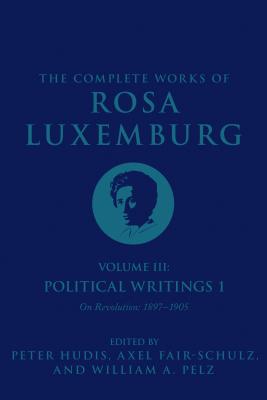 This collection is the first of three volumes of the Complete Works devoted to the central theme of Rosa Luxemburg’s life and work—revolution. Spanning the years 1897 to the end of 1905, they contain speeches, articles, and essays on the strikes, protests, and political debates that culminated in the 1905 Russian Revolution—one of the most important social upheavals of modern times.

Luxemburg’s near-daily articles and reports during 1905 on the ongoing revolution (which comprises the bulk of this volume) shed new light on such issues as the relation of spontaneity and organization, the role of national minorities in social revolution, and the inseparability ofthe struggle for socialism from revolutionary democracy. We become witness to Luxemburg’s effort to respond to the impulses, challenges, and ideas arising from a living revolutionary process, which in turn becomes the source of much of her subsequent political theory—such as her writings on the mass strike, her strident internationalism, and her insistence that revolutionary struggle never take its eyes off of the need to transform the human personality.

Virtually all of these writings appear in English for the first time (translated from both German and Polish) and many have only recently been identified as having been written by Luxemburg.

“The reports and observations within the volume surrounding the concept of revolution pave the way for Luxemburg’s intellectual development. Undoubtedly these writings together with the forthcoming volumes will expand on these ideas of revolution and history.”
—Sevgi Doğan, Marx & Philosophy

Peter Hudis is Professor of Humanities and Philosophy, Oakton Community College. He has published extensively on Marxist theory and is General Editor of The Complete Works of Rosa Luxemburg.
Loading...
or
Not Currently Available for Direct Purchase