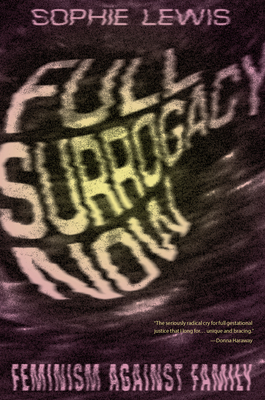 Where pregnancy is concerned, let every pregnancy be for everyone. Let us overthrow, in short, the “family”

The surrogacy industry is estimated to be worth over $1 billion a year, and many of its surrogates around the world work in terrible conditions—deception, wage-stealing and money skimming are rife; adequate medical care is horrifyingly absent; and informed consent is depressingly rare. In Full Surrogacy Now, Sophie Lewis brings a fresh and unique perspective to the topic. Often, we think of surrogacy as the problem, but, Full Surrogacy Now argues, we need more surrogacy, not less!

Rather than looking at surrogacy through a legal lens, Lewis argues that the needs and protection of surrogates should be put front and center. Their relationship to the babies they gestate must be rethought, as part of a move to recognize that reproduction is productive work. Only then can we begin to break down our assumptions that children “belong” to those whose genetics they share. Taking collective responsibility for children would radically transform our notions of kinship, helping us to see that it always takes a village to make a baby.

“Lewis takes one of the most everyday things about being human and thinks it through from the point of view of a cyborg communism. This book goes far into places where few gender abolitionists have ventured and brings us a vision of another life.”
—McKenzie Wark, author of A Hacker Manifesto

“Full Surrogacy Now is more than an intervention, it is a landmark text of visionary feminist thinking. Sophie Lewis tears down decades of essentialist and contradictory presumptions on labor, motherhood and ownership to offer us the possibility of new ways to live with and for each other. This book is as breathtaking as it is necessary.”
—Natasha Lennard, author of Violence: Humans in Dark Times (with Brad Evans)

“Full Surrogacy Now arrived and I could not stop reading. The crises of our time are crises of reproduction. Radical that she is, Sophie Lewis gets right to the root of the matter—and, radical that she is, finds its roots to be intersecting and entangled, ‘lovely, replicative, baroque,’ as one of her own gestators, Donna Haraway, might put it. But the gestator? Lewis moves expertly through decades of debates, as well as a rapidly growing body of empirical research, on surrogacy to carry us beyond the by-now familiar refrain that this or that activity ‘is work.’ Her goal could hardly be more ambitious: to rethink the ‘natural’ gestation that every one of us comes from. I will reread this book for the sense it gives me that new ways of making one another and the world new might, in fact, be possible. Its verve and wit make me feel sure that Lewis’ reproductive commune will be fun.”
—Moira Weigel, author of Labor of Love: The Invention of Dating

“An extraordinary book, as nuanced as it is provocative. Lewis delivers an incisive analysis, combining sensitivity to the material conditions faced by gestational laborers with a radical utopian vision for what surrogacy might become. It’s an exhilarating read and is likely to have a substantial influence on the field. I cannot recommend it highly enough.”
—Helen Hester, author of Xenofeminism

“An instructive and moving book about the work of babymaking and the best possible future for birthing and raising children. It offers both a convincing polemic about surrogacy’s past and present, and a vision of how to make it both more common and more mutually beneficial. Lewis treats surrogacy as a signal example of what will be integral to any common human flourishing to come: unmaking gender and the family as we know them, to build new kinds of sociality and care for what is not ‘biologically’ ‘ours.’ I was floored by it.”
—Sarah Brouillette, author of Literature and the Creative Economy

“Sophie Lewis is at the top of a new generation of scholars and activists thinking the transformation of gestational labor within contemporary pharmacopornographic capitalism. Neither simply natural nor banally cultural, gestation appears as the unthought core of gender and sexual politics, and the key of a forthcoming womb revolution: trans-Marx meets mammal’s politics!”
—Paul B. Preciado, author of Testo Junkie

"Sophie Lewis and her expansive vision of feminism are desperately needed right now. She makes the work of undoing what ‘womanhood’ has come to mean look possible and irresistible."
—Melissa Gira Grant, author of Playing the Whore: The Work of Sex Work

“Pregnancy. Babies. Families. Nature itself. Like capitalism, communism knows no bounds. Relentless in the task of seizing of the means of reproduction, Sophie Lewis is the Right’s worst nightmare.”
—George Ciccariello-Maher, author of Building the Commune

“Full Surrogacy Now makes a significant contribution to the pressing political project of advocating for the rights of those workers whose labour is so often delegitimised, exploited and criminalised … join[ing] such texts as Juno Mac and Molly Smith’s Revolting Prostitutes in combating the white, liberal, trans-exclusionary, whorephobic, ‘feminist’ discourse which is currently dominating conversations around sex work and gestational labour.”
—Vector

“Lewis is attempting to do for pregnancy what the Wages for Housework movement did in reconceptualizing the unpaid labor done by women in the home as work. And recognizing surrogacy as work and surrogates as workers is a necessary first step, for if surrogacy is work, then isn’t, by extension, every pregnancy?”
—Esther Wang, Jezebel

“The radical openness of these dreams is alluring … [Full Surrogacy Now] leaves one with the beautiful, liquid possibility of a world that recognizes ‘our inextricably surrogated contamination with and by everybody else.’”
—Times Literary Supplement

“A thrilling new intervention … by placing reproductive labour at the centre of her vision in Full Surrogacy Now, Lewis confronts a central issue that continues to be sidelined in the male-dominated field of futurism.”
—New Humanist

“Incisive and exciting … a must-read for those interested in queer feminist engagements with family, reproductive labour and global class relations. ”
—LSE Review of Books

“For a business that deals in common ingredients and a mature technology, surrogacy is curiously expensive … Nevertheless, the price tag remains high, as do the hoops to jump through, adding to already compelling human drama. Full Surrogacy Now is a prosurrogacy tract that finds plenty to fault in the current situation.”
—Lela Edlund, Population and Development Review

“A short critical work that acknowledges the radical potential of technology, while simultaneously presenting a deep, nuanced awareness of its current shortcomings, as well as our need to overcome them.”
—Benjamin Carpenter, Medium

Sophie Lewis is a theorist, critic and translator living in Philadelphia. She publishes her work—on topics ranging from dating to Donna Haraway—on both scholarly and non-academic platforms, including Boston Review, Viewpoint, Signs, Science as Culture, Jacobin, the New Inquiry, Mute, and Salvage Quarterly. Her translations include Communism for Kids by Bini Adamczak (with Jacob Blumenfeld), A Brief History of Feminism by Antje Schrupp, and Other and Rule by Sabine Hark and Paula Villa. A feminist committed to cyborg ecology and queer communism, she is a member of the Out of the Woods collective and an Editor at Blind Field: A Journal of Cultural Inquiry.