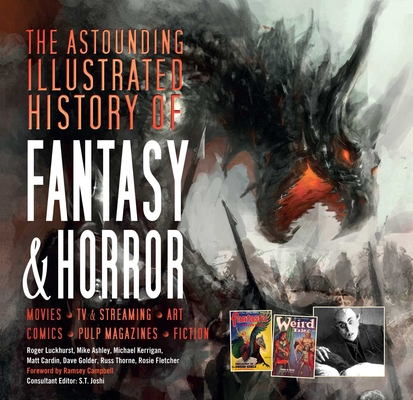 Companion title to The Astounding Illustrated History of Science Fiction this new book reflects the same roots in Gothic literature but follows a complementary path through the 20th century, to the movies of Peter Jackson, the success of streaming TV series such as Grimm, and the fantasy of Neil Gaiman's American Gods. From the wellspring of Frankenstein, Germanic fairy tales, and heroic, epic myths a dark and fantastic path can be found to the fragmentation of the 1930s: the schlock horror of early modern movies, the invention of High Fantasy by Tolkien and fellow Inkling C.S. Lewis, and the pulp magazine powerhouse Weird Tales with Robert E. Howard's sword and sorcery archetype Conan. A brilliant concoction of movie posters, stills, book covers, fantastic art and incredible timelines.

S.T. Joshi (consultant editor and introduction) is the author of The Weird Tale (1990), The Modern Weird Tale (2001), and Unutterable Horror: A History of Supernatural Fiction (2012). His award-winning biography H.P. Lovecraft: A Life (1996) was later expanded as I Am Providence: The Life and Times of H. P. Lovecraft (2010). He has prepared editions of the work of Arthur Machen, Lord Dunsany, M.R. James, Algernon Blackwood, Ambrose Bierce, Clark Ashton Smith, and other classic authors of weird fiction, as well as the anthology American Supernatural Tales (2007).
Loading...
or
Not Currently Available for Direct Purchase