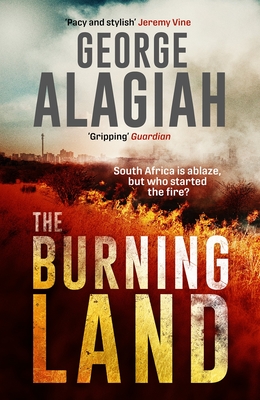 'It was never meant to be like this. Sabotage, yes. Propaganda, yes. All of that and more - but not this. Not murder.'

South Africa has become a powder keg. Its precious land is being sold off to the highest bidders while the country's corrupt elite pocket the profits. As the dreams and hopes of its people are threatened, frustration turns to violence. With the shocking murder of one of the country's bright young hopes, the fuse is well and truly lit. Conflict mediator Lindi and her childhood friend Kagiso find themselves in the heart of the chaos, fighting to save themselves and their country as events are set in motion that no one - least of all they - can control.

George Alagiah is presenter of BBC News at Six, Britain's most watched news programme. That role followed ten years as a foreign correspondent, covering the 9/11 attacks on New York, the genocide in Rwanda, civil wars in Liberia, Afghanistan and Sierra Leone, and Nelson Mandela's presidency. He's won numerous awards, including The Royal Television Society and Amnesty International among others. Before the BBC he worked in print journalism. In 2008 he was awarded an OBE for services to journalism. The Burning Land was shortlisted for the Authors' Club Best First Novel Award and the Paul Torday Memorial Prize.
Loading...
or support indie stores by buying on