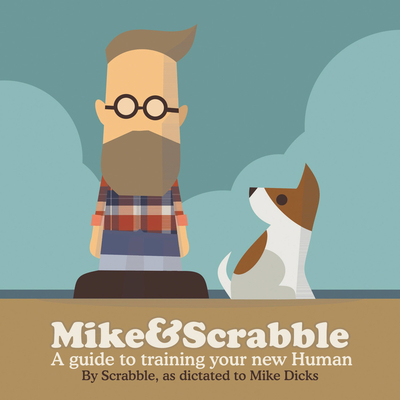 A guide to training your new human

There are many wise, practical, and academic books that explore the relationship between pets and their owners; Mike&Scrabble is not one of them. Instead, this picture book for adults gives an insight into the mind of a dog who has acquired a slightly damaged human, and sets about trying to train him.

Mike&Scrabble's simple illustrations and one-line observations were originally designed by Mike, despite what Scrabble says, as posts for Twitter and Facebook, to joke about becoming a dog owner. The posts gathered a following of loyal fans, mainly dog owners (about 90%), mainly women (about 55%), and mostly English or American (70%). Except for one fan in Vietnam.

This is a book that dogs will buy, but as they have trouble using an iPad and don't keep money on them, it may well be attractive to their Human pets.

Mike Dicks has had what is best described as a 'portfolio career,' and a life of creating anecdotes about himself. Mike accidentally got jobs selling technologies before anyone wanted them, then made bits of the world-wide-web before anyone knew they needed them. Recently, Mike has been travelling the world teaching people how not to make the same mistakes that he did, and making pictures of Brighton and dead celebrities for people to buy. Mike lives by the sea, in Hove, with a dog called Scrabble. He's married to Debbie and has two sons, and a stepson and stepdaughter.

Scrabble lives in Hove with Mike. She was rescued from the Allsorts Rescue Centre in January 2016 and her story should really be the subject of a 'prequel' book. By all accounts she was an accident on an Irish puppy farm: there are far too many places like these in Ireland, and far too many 'accidents.' The volunteers at Allsorts say that she was picked up by a feisty Irish woman who drives around all the farms collecting unwanted dogs, before the farmers, well, you simply don't want to know what the farmers do with these unwanted accidents. Our heroine then takes her collected dogs to the RSPCA or Battersea Dogs Home, which bring them to the UK and distribute them to various charities and rescue centres. Scrabble probably has hundreds of siblings; perhaps you are owned by one of them ...?