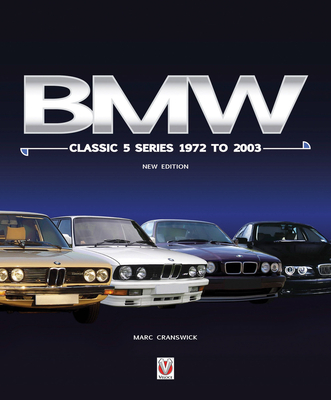 Follow the evolution of BMW’s middle child through the decades in all major markets. Marvel at the mystique of BMW’s motorsport and exotic tuner cars reaching the 180mph milestone on V8 power. Consider BMW’s phoenix-like rise from the ashes of WWII, regaining its sports, luxury reputation, and powering on to become the ultimate business machine under chairman Eberhard von Kuenheim.

Marc Cranswick has been writing on the subject of classic high-performance German cars for many years. He has been involved with BMW since the e12 and e21 were current models.

Marc Cranswick has had a lifelong interest in cars and all things mechanical, and has written about and drawn the cars that he loves for many years; these include a variety of European, Japanese and American marques. Formal study of the postwar American car market has led to a series of books about the cars and trucks of the Big 3 and independent automakers. He writes enthusiast-directed model history books, and has involvement with many specialist car clubs. His reference book The Cars of American Motors – An Illustrated History, was featured on NBC’s business channel CNBC. His other books include Ford Mustang II & Pinto (as seen on channel PBS' MotorWeek); Ford Midsize Muscle - Fairlane, Torino & Ranchero; BMW Classic 5 Series 1972 to 2003; MOPAR Muscle - Barracuda, Dart & Valiant 1960-1980; Mazda Rotary-Engined Cars, and Pontiac Firebird - The Auto-Biography.