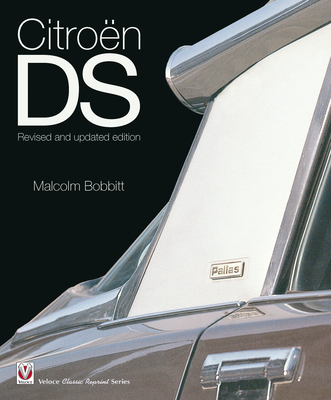 Available again after a long absence, this book tells the story of the most radical of Citroën’s idiosyncratic offerings: the DS.

The car was sensational when it was introduced in 1955; twenty years and 1.45 million cars later it was still technically advanced in relation to most other cars. Revolutionary in driving characteristics and comfort, it remains one of the most innovative cars of all time.

In this book, Malcolm Bobbitt, a well-known motoring author and DS owner, gives an in-depth guide to the Citroën DS - its history, design, and specifications, as well as valuable advice for buyers and owners. This long overdue revised edition contains much new and updated information.

Malcolm Bobbitt is a writer who  focuses mainly on automotive subjects. With over 30 books to his credit, including marque histories of the Fiat 500 and 600, Rover P4, Volkswagen, Rolls-Royce Silver Shadow and Silver Spirit, Bentley T-Series and Mulsanne, and postwar Hillmans, Malcolm’s output is diverse. He also contributes to a number of magazines. An avid motoring enthusiast, Malcolm has owned an array of classic cars, including British-built Citroens, a Traction Avant, an early DS, and a Fiat 500c Topolino. Malcolm was born in London, but now lives with his wife in Cumbria on the edge of the Lake District. His other interests include walking, travel, industrial and transport archaeology, classical music, fine wines and collecting motoring books.