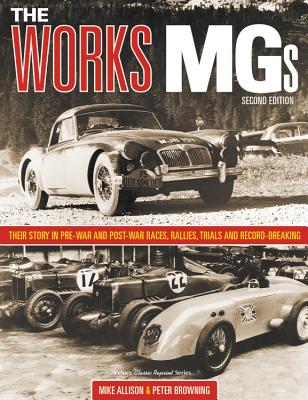 The book covers prewar racing and record-breaking attempts, as well as the postwar achievements of the works cars entered in races and rallies by the BMC Competitions Department. The authors, who both worked with MG, bring together their own experiences, extensive research, and the recollections of former colleagues to produce a unique insight into this important aspect of British motorsport history.

Peter Browning enjoyed a 50-year career within motorsport, encompassing racing, rallying, and motorcycling. He is best known as the last competitions manager of BMC, serving between 1967 and 1970, and later BL – acknowledged worldwide as the most successful rally team of the era. As executive director of the British Racing & Sports Car Club (the world’s premier race organising club at the time), he was the most experienced clerk of the course in the UK. He spearheaded the creation of many new racing formulae and events, and served on numerous race and rally administrative committees. Peter went on to form his own company, which handled the worldwide media services for Marlboro, motorsport’s largest sponsor. He was the founding general secretary of the Austin-Healey Club, and before retirement worked as competitions secretary of the MG Car Club.