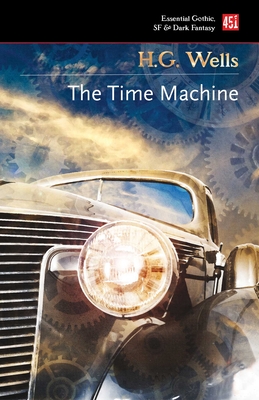 A masterful tale from the founding father of science fiction. An ingenious inventor creates a machine which can hurtle through time.With no idea what to expect, the time traveller sets out on an epic adventure into the unknown. On his first journey into the future of the human race, the traveller encounters the Eloi: an apathetic but carefree tribe, forming a close bond with the woman Weena. Less appealing however, are the bestial Morlocks who stalk the area at night, picking off the Eloi for food. When his time machine disappears, the time traveller is faced with no option but to confront the ape-like creatures, unwittingly starting a deadly battle in order to escape. FLAME TREE 451: From mystery to crime, supernatural to horror and fantasy to science fiction, Flame Tree 451 offers a healthy diet of werewolves and mechanical men, blood-lusty vampires, dastardly villains, mad scientists, secret worlds, lost civilizations and escapist fantasies. Discover a storehouse of tales gathered specifically for the reader of the fantastic. Each book features a brand new biography and glossary of Literary, Gothic and Victorian terms.

Herbert George Wells (1866-1946). Novelist, journalist, social reformer and historian H.G. Wells is one of the greatest science fiction writers. With Aldous Huxley and, later, George Orwell he defined the adventurous, social concern of early speculative fiction where the human condition was played out on a greater stage. Wells created over fifty novels, including The Time Machine, The Invisible Man and The War of the Worlds.
Loading...
or
Not Currently Available for Direct Purchase