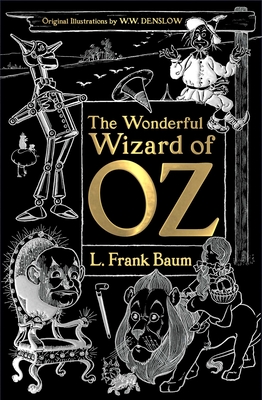 L. Frank Baum's work is universally celebrated and The Wonderful Wizard of Oz is known worldwide, in particular for its 1939 musical film adaptation starring Judy Garland as Dorothy. Published in 1900, The Wonderful Wizard of Oz depicted the young farm girl Dorothy and her pet dog Toto, who are swept away to the Land of Oz in a cyclone. Baum was inspired by the works of the Brothers Grimm and Hans Christian Andersen, focusing on manipulating the fairy tale tradition with an American feel in the Oz series. This edition collects together the best of L. Frank Baum's Oz works, taking material from the very first 1900 publication of The Wonderful Wizard of Oz and subsequent novels including Ozma of Oz, Dorothy and the Wizard in Oz and The Lost Princess of Oz.

Lyman Frank Baum was born in 1856, Chittenango, New York, passing away in 1919. was a prolific children's author and playwright most famous for The Wonderful Wizard of Oz. Also an editor and some-time actor he created the series of books which added to the Oz canon in the early 1900s, although it's the original tale of Dorothy that has become one of the most successful and popular fantasies of all time, inspiring generations of adults and children with new movie and theatrical adaptations. Baum worked closely with artist W.W. Denslow many of whose illustrations appear in this edition.
Loading...
or
Not Currently Available for Direct Purchase