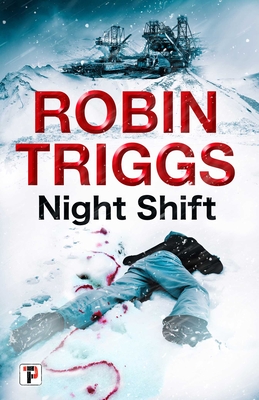 Robin Triggs does a good job setting up a climate of suspicion in Night Shift, and the book has some genuinely chilling moments. - Crime Review Antarctica. A mining base at the edge of the world. Anders Nordvelt, last-minute replacement as head of security, has no time to integrate himself into the crew before an act of sabotage threatens the project. He must untangle a complex web of relationships from his position as prime suspect. Then a body is found in the ice. Systems fail as the long night falls. Now Anders must do more than find a murderer: he must find a way to survive. Will anyone endure the night shift, or will ice and frozen corpses be all that remains? FLAME TREE PRESS is the new fiction imprint of Flame Tree Publishing. Launching in 2018 the list brings together brilliant new authors and the more established; the award winners, and exciting, original voices.

Rob was raised in Bradford before heading, at eighteen, to the bright libraries of Norfolk. Music was his main interest at this time. He played drums and sang whilst writing copious amounts of lyrics, some of which tipped over into the vaguely-defined realm of poetry. In 2003 he made the top 500 of the Dublin International Poetry Competition. He studied archaeology in Queen's University, Belfast before returning to Norfolk and starting to write seriously. He received a boost when he moved to the middlest of middle Englands and joined Abingdon Writers', a fantastic group that were quick point out all his writing sins. He was Chair for a spell but abdicated as soon as decency allowed. When not writing he studies the past: archaeology and the historic landscape remain passions. He's also an exceptionally poor cricketer, turning out for The Bodleian Library's collection of misfits. He did, however, once bowl Sebastian Faulkes. At the Bodleian he tells tourists that yes, Harry Potter was filmed here, but no, they can't go inside. He also works as a proofreader. A freshly-minted father, he spends his time changing nappies, Tweeting and - when the opportunity presents itself - doing the odd bit of creating. He keeps a blog - www.robintriggs.wordpress.com - of assorted writerly ramblings. You can also find him on Twitter @RobinTriggs.
Loading...
or
Not Currently Available for Direct Purchase