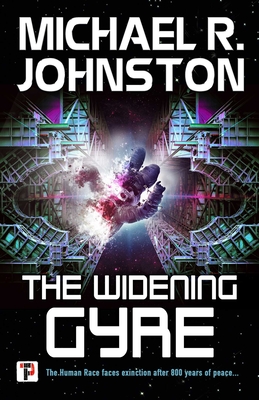 The Widening Gyre (The Remembrance War)

Eight hundred years ago, the Zhen Empire discovered a broken human colony ship drifting in the fringes of their space. The Zhen gave the humans a place to live and folded them into their Empire as a client state. But it hasn’t been easy. Not all Zhen were eager to welcome another species into their Empire, and humans have faced persecution. For hundreds of years, human languages and history were outlawed subjects, as the Zhen tried to mold humans into their image. Earth and the cultures it nourished for millennia are forgotten, little more than legends.

One of the first humans to be allowed to serve in the Zhen military, Tajen Hunt became a war hero at the Battle of Elkari, the only human to be named an official Hero of the Empire. He was given command of a task force, and sent to do the Empire’s bidding in their war with the enigmatic Tabrans. But when he failed in a crucial mission, causing the deaths of millions of people, he resigned in disgrace and faded into life on the fringes as a lone independent pilot.

When Tajen discovers his brother, Daav, has been killed by agents of the Empire, he, his niece, and their newly-hired crew set out to finish his brother’s quest: to find Earth, the legendary homeworld of humanity. What they discover will shatter 800 years of peace in the Empire, and start a war that could be the end of the human race.

Praise For The Widening Gyre (The Remembrance War)…

“Johnston's debut will keep readers on the edge of their seats as the heroes get themselves into one scrape after another. It has a hint of Battlestar Galactica, but with giant reptilian aliens. Johnston, with skillful plotting and impeccable world building, takes the tale of Tajen and his crew searching for home and shapes it into an unforgettable journey."
— ALA Booklist

“Readers will feel invested in Tajen’s team of affable human rebels and their futures.”
— Publishers Weekly

“Fans of David Weber or Elizabeth Moon will enjoy this debut, and experienced sf readers will catch some winks at other series.”
— Library Journal

“Johnston proves that he has a deft hand at world building and is giving us a new take on Earth’s future [...] A thrilling ride full of mystery and mayhem.”
— ScienceFiction.com

“What makes the book work is the characters. They all have interesting flaws, strengths, short-sightedness, and wisdom: they’re well rounded enough that I really came away liking them, even some of the villains.”
— Locus Magazine

“Johnston has taken the best elements from the old masters of space opera and created a fresh and fun story.”
— scintilla.info

"The story is the action-packed space opera that the synopsis suggests. But it was so much more! [...]But I think the best surprise, for me, was the introduction of LGBT characters. It was unexpected, yet done in such a casual way that it was just natural."
— Astroclone