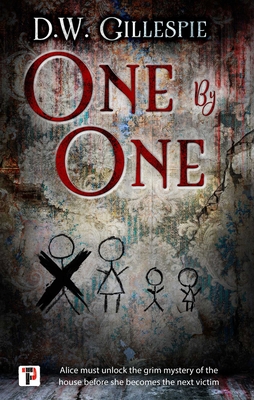 The Easton family has just moved into their new fixer-upper, a beautiful old house that they bought at a steal, and Alice, the youngest of the family, is excited to explore the strange, new place. Her excitement turns to growing dread as she discovers a picture hidden under the old wallpaper, a child's drawing of a family just like hers. Soon after, members of the family begin to disappear, each victim marked on the child's drawing with a dark black X. It's up to her to unlock the grim mystery of the house before she becomes the next victim. FLAME TREE PRESS is the new fiction imprint of Flame Tree Publishing. Launched in 2018 the list brings together brilliant new authors and the more established; the award winners, and exciting, original voices.

A fan of all things dark and horrific, D.W. Gillespie has been writing horror, sci-fi, and fantasy for longer than he would like to admit. After years of daydreaming, he started taking it seriously in college after a creative writing class helped spark his motivation. After winning a local writing award, he realized that his path forward was clear. In the years since, he's been featured in many publications, both online and in print. He's the author of more than a dozen novels, including The Toy Thief, Still Dark, and Handmade Monsters. A lifelong native of Middle Tennessee, he still lives there today with his wife and two children. For One by One, Gillespie was influenced by his experience of moving houses often when growing up. One particular house was supposedly haunted (according to previous tenants) and became specially inspirational, and he knew he wanted it to feature in one of his books as a character in the story.
Loading...
or support indie stores by buying on