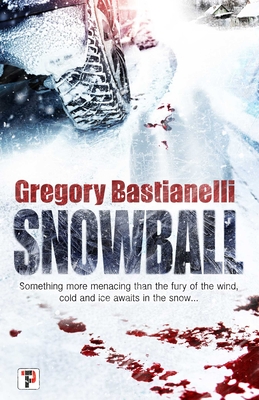 A group of motorists become stranded on a lonely stretch of highway during a Christmas Eve blizzard and fight for survival against an unnatural force in the storm. The gathered survivors realize a tenuous connection among them means it may not be a coincidence that they all ended up on this highway. An attempt to seek help leads a few of the travelers to a house in the woods where a twisted toymaker with a mystical snow globe is hell bent on playing deadly games with a group of people just trying to get home for the holidays. FLAME TREE PRESS is the new fiction imprint of Flame Tree Publishing. Launched in 2018 the list brings together brilliant new authors and the more established; the award winners, and exciting, original voices.

Gregory Bastianelli is the author of the novels Loonies and Jokers Club. His stories have appeared in the magazines Black Ink Horror, Sinister Tales and Beyond Centauri; the anthologies Night Terrors II, Cover of Darkness and Encounters; and the online magazines Absent Willow Review and Down in the Cellar. His novella The Lair of the Mole People appeared in the pulp anthology Men & Women of Mystery Vol. II. He graduated from the University of New Hampshire where he studied writing under instructors Mark Smith, Thomas Williams and Theodore Weesner. He worked for nearly two decades at a small daily newspaper where the highlights of his career were interviewing shock rocker Alice Cooper and B-movie icon Bruce Campbell. He became enchanted with the stories of Ray Bradbury as a young child, and his love of horror grew with the likes of Richard Matheson, Robert Bloch, Stephen King and Ramsey Campbell. He lives in Dover, NH, in a Colonial home built in the 1700s. He enjoys kayaking, hiking and bicycling in the summer and snowshoeing and racquetball in the winter. Along with spending time with family, he enjoys traveling, especially to Italy where he has visited his ancestral home and relatives residing there and hiked the Path of the Gods on the Amalfi Coast and to the top of Mt. Vesuvius.
or
Buy Here
Copyright © 2020 American Booksellers Association