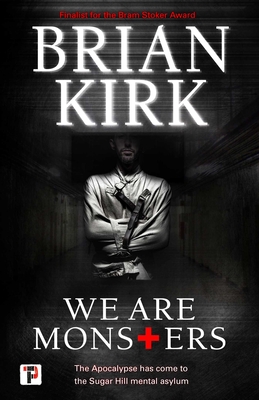 Nominated for a Bram Stoker Award(R) for Superior Achievement in a First Novel. A stark and frightening novel. Horror fans should definitely seek this one out. - Booklist Some doctors are sicker than their patients. When a troubled psychiatrist loses funding to perform clinical trials on an experimental cure for schizophrenia, he begins testing it on his asylum's criminally insane, triggering a series of side effects that opens the mind of his hospital's most dangerous patient, setting his inner demons free. FLAME TREE PRESS is the new fiction imprint of Flame Tree Publishing. Launched in 2018 the list brings together brilliant new authors and the more established; the award winners, and exciting, original voices.

Brian Kirk is an author of dark thrillers and psychological suspense. His debut novel, We Are Monsters, was released in July 2015 and was nominated for a Bram Stoker Award(R) for Superior Achievement in a First Novel. His short fiction has been published in many notable magazines and anthologies. Most recently, Gutted: Beautiful Horror Stories and Behold! Oddities, Curiosities and Undefinable Wonders, where his work appears alongside multiple New York Times bestselling authors, and received an honorable mention in Ellen Datlow's Best Horror of the Year compilation. During the day, Brian works as a freelance marketing and creative consultant. His experience working on large, integrated advertising campaigns for international companies has helped him build an effective author platform, and makes him a strong marketing ally for his publishing partners. In addition, Brian has an eye for emerging media trends and an ability to integrate storytelling into new technologies and platforms.
Loading...
or
Not Currently Available for Direct Purchase