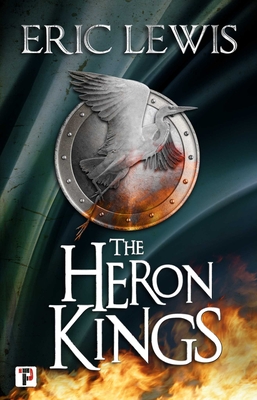 After a warlord slaughters her patients, Sister Alessia quits the cloister and strikes out on her own to heal the victims of a brutal dynastic conflict. Her roaming forest camp unwittingly becomes the center of a vengeful peasant insurgency, raiding the forces of both sides to survive. Alessia struggles to temper their fury as well as tend wounds, consenting to ever greater violence to keep her new charges safe. When they uncover proof of a foreign conspiracy prolonging the bloodshed, Alessia risks the very lives she’s saved to expose the truth and bring the war to an end.

Praise For The Heron Kings…

“A promising debut from Eric Lewis. The Heron Kings is full of consistent characters that are inspiring and tough. Gruesome at times, this shows the true savagery of war and has enough action and intrigue to keep you on your toes.”
— GrimDark Magazine

“Lewis’s excellent debut introduces a band of well-drawn outlaws who don’t care who wins the civil war that’s ravaging their land, just so long as it ends [...] The central trio are marvelously realized, and their developments amid the ongoing horrors are effortlessly convincing. Readers who love medieval-esque fantasy will delight in this rousing tale of rebellion.”
— Publishers Weekly (Starred Review)

“There’s a Robin Hood feel to Lewis’ debut, as average citizens rise up against the warmongering upper class with justified anger [...] Readers will root for the [characters].”
— ALA Booklist

“If you like war-time fiction and epic fantasies, you’ll love this book. Eric Lewis’s writing reminds me of the writing of Brandon Sanderson — with vernacular that’s uncomplicated yet full of emotion and depth — and that’s some of the highest praise I can give a fantasy novel.”
— Backshelf Books

“The Heron Kings is a story of war and revenge, vigilante justice and self-discovery. The characters are fascinating and the world building is really good.”
— FanFiAddict

“A well paced tale with great characters, lots of scheming, violence, blood and gore in a clever plot that makes this a gripping read from start to finish.”
— The Bookwormery

Eric Lewis is a research chemist weathering the latest rounds of layoffs and trying to remember how to be a person again after surviving grad school. When not subjecting his writing to serial rejection, he can be found gathering as many different sharp and pointies as possible and searching for the perfect hiking trail, archery range or single malt Scotch. THE HERON KINGS is his first novel.
Loading...
or
Not Currently Available for Direct Purchase