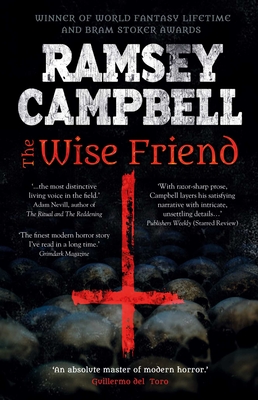 "An absolute master of modern horror. And a damn fine writer at that" - Guillermo del Toro Featured in Booklist's Top SF/Fantasy & Horror of 2020. Patrick Torrington's aunt Thelma was a successful artist whose late work turned towards the occult. While staying with her in his teens he found evidence that she used to visit magical sites. As an adult he discovers her journal of her explorations, and his teenage son Roy becomes fascinated too. His experiences at the sites scare Patrick away from them, but Roy carries on the search, together with his new girlfriend. Can Patrick convince his son that his increasingly terrible suspicions are real, or will what they've helped to rouse take a new hold on the world? FLAME TREE PRESS is the new fiction imprint of Flame Tree Publishing. Launched in 2018 the list brings together brilliant new authors and the more established; the award winners, and exciting, original voices.

Ramsey Campbell was born in Liverpool in 1946 and still lives on Merseyside. The Oxford Companion to English Literature describes him as "Britain's most respected living horror writer". He has been given more awards than any other writer in the field, including the Grand Master Award of the World Horror Convention, the Lifetime Achievement Award of the Horror Writers Association, the Living Legend Award of the International Horror Guild and the World Fantasy Lifetime Achievement Award. In 2015 he was made an Honorary Fellow of Liverpool John Moores University for outstanding services to literature. Among his novels are The Face That Must Die, Incarnate, Midnight Sun, The Count of Eleven, Silent Children, The Darkest Part of the Woods, The Overnight, Secret Story, The Grin of the Dark, Thieving Fear, Creatures of the Pool, The Seven Days of Cain, Ghosts Know, The Kind Folk, Think Yourself Lucky and Thirteen Days by Sunset Beach. Needing Ghosts, The Last Revelation of Gla'aki, The Pretence and The Booking are novellas. His collections include Waking Nightmares, Alone with the Horrors, Ghosts and Grisly Things, Told by the Dead, Just Behind You and Holes for Faces, and his non-fiction is collected as Ramsey Campbell, Probably. Limericks of the Alarming and Phantasmal are what they sound like. His novels The Nameless, Pact of the Fathers and The Influence have been filmed in Spain. He is the President of the Society of Fantastic Films.
Loading...
or support indie stores by buying on