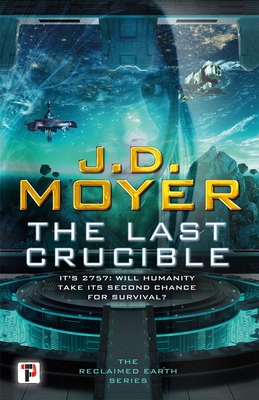 Earth is mostly depopulated in the wake of a massive supervolcano, but civilization and culture are preserved in vast orbiting ringstations, as well as in a few isolated traditional communities on Earth. Jana, a young Sardinian woman, is in line to become the next maghiarja (sorceress) by way of an ancient technology that hosts a community of minds. Maro, an ambitious worldship artist, has designs to use the townsfolk as guinea pigs in a brutally invasive psychological experiment. Jana must protect her people and lead them into the future, while deciding whom to trust amongst possible ringstation allies.

Praise for book 1 and 2 in the Reclaimed Earth series:

"...wildly imaginative and totally entertaining. J.D. Moyer, you have yourself a new fan." — Cemetery Dance

"The Sky Woman scores on so many points. Great characters (I include the ostensible bad guy Adrian), several intertwining complex stories, a highly imaginative future Earth for a setting and the possibility of exciting future instalments." — Whiskey with my Book

"The Sky Woman is an interesting blend of historical and sci-fi elements, that really brings a rather unique voice to the genre." — In Libris Veritas

J.D. Moyer is the author of the Reclaimed Earth science fiction series and numerous works of short fiction. He lives in Oakland, California, with his wife, daughter, and mystery-breed dog. Don Sakers described his debut novel, The Sky Woman (Book 1 in the Reclaimed Earth series), as: ‘A well-told story reminiscent of Ursula K. LeGuin or Karen Lord.’
Loading...
or support indie stores by buying on