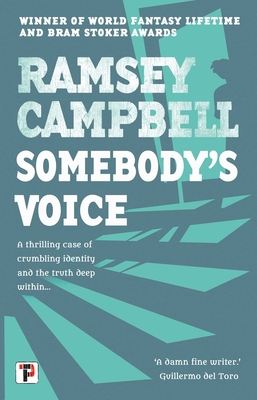 “An absolute master of modern horror. And a damn fine writer at that” - Guillermo del Toro

Alex Grand is a successful crime novelist until his latest book is condemned for appropriating the experience of victims of abuse. In a bid to rescue his reputation he ghostwrites a memoir of abuse on behalf of a survivor, Carl Batchelor. Carl’s account proves to be less than entirely reliable; someone is alive who shouldn’t be. As Alex investigates the background of Carl’s accusations his grasp of the truth of the book and of his own involvement begins to crumble. When he has to testify in a court case brought about by Carl’s memoir, this may be one step too far for his insecure mind…

FLAME TREE PRESS is the new fiction imprint of Flame Tree Publishing. Launched in 2018 the list brings together brilliant new authors and the more established; the award winners, and exciting, original voices.

"Somebody’s Voice was a quality thriller and shows the versatility and range of one of the giants of the horror world."
— Ginger Nuts of Horror

"Somebody’s Voice is a harrowing read, a well-crafted novel about the writing process and the oddballs who pursue it as a career, about the fragile nature of truth, about identity, memory, and voice. It’s a terrific addition to Campbell’s list of accomplishments."
— Considering Stories

“Highly recommended for Campbell's fans and anyone who is not afraid to face the dark side of humanity in an attempt to open minds.”
— A Reviewer Darkly

“Good horror writers are quite rare, and Campbell is better than just good”
— Stephen King

“He is unsurpassed in the subtle manipulation of mood... You forget you’re just reading a story”

“An absolute master of modern horror. And a damn fine writer at that”
— Guillermo del Toro

“I would say that only five writers have written serious novels which incorporate themes of fantasy or the inexplicable and still qualify as literature: T. E. D. Klein, Peter Straub, Richard Adams, Jonathan Carroll and Ramsey Campbell."
— Stephen King

“The most sophisticated and highly regarded of British horror writers”

“He writes of our deepest fears in a precise, clear prose that somehow manages to be beautiful and terrifying at the same time. He is a powerful, original writer, and you owe it to yourself to make his acquaintance”

“One of the few who can scare and disturb as well as make me laugh out loud. His humour is very black but very funny, and that’s a rare gift to have”
— Mark Morris

“For sheer ability to compose disturbing, evocative prose, he is unmatched in the horror/fantasy field... He turns the traditional horror novel inside out, and makes it work brilliantly”
— Fangoria

“A horror writer in the classic mould... Britain’s premier contemporary exponent of the art of scaring you out of your skin”

“The undisputed master of the psychological horror novel”

“The Grand Master of British horror... the greatest living writer of horror fiction”

“In Campbell’s hands words take on a life of their own, creating images that stay with you, feelings that prey on you, and people you hope never ever to meet”

“Ramsey Campbell is the nearest thing we have to an heir to M. R. James”

“The finest writer now working in the horror field”