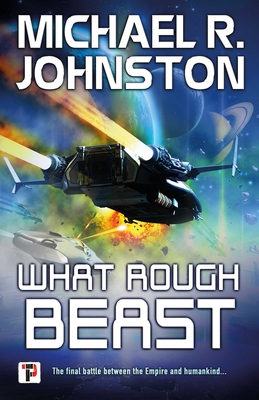 What Rough Beast (The Remembrance War)

Analog SF called the first two books in the series: "Fine thrillers with many resonances for today’s world." In a bombastic, thrilling ride Johnston's new book brings war to space.

The sequel to The Widening Gyre and Blood-Dimmed Tide praised by Locus, ScienceFiction.com, Booklist, Library Journal and more!

As the Zhen Empire descends into civil war, Tajen, Liam, and Katherine each have their own part to play in the final conflict between the human race and the Zhen Empire. As Tajen searches the outer regions in an attempt to find and recruit Zhen deserters to his side, Katherine heads for Marauder space to seek out technology their Tabran allies need. Liam, believing his two best friends dead, must keep the human fleet alive as it is pursued across the Empire by Zhen forces. As the final battle approaches, each of them will be tested to their limits.

Praise For What Rough Beast (The Remembrance War)…

“Johnston's debut will keep readers on the edge of their seats as the heroes get themselves into one scrape after another. It has a hint of Battlestar Galactica, but with giant reptilian aliens. Johnston, with skillful plotting and impeccable world building, takes the tale of Tajen and his crew searching for home and shapes it into an unforgettable journey." - ALA Booklist

"Tajen Hunt [and] the rest of the crew from the first book of The Remembrance War series are back and determined to protect and maintain control of their ancestral home, Earth, [in] a narrative that will resonate with readers." -- Booklist

“Fans of David Weber or Elizabeth Moon will enjoy this debut, and experienced sf readers will catch some winks at other series.” -- Library Journal

"Fine thrillers with many resonances for today’s world, both The Blood-Dimmed Tide and its precursor are rewarding reads." -- Analog SF

“Johnston proves that he has a deft hand at world building and is giving us a new take on Earth’s future [...] A thrilling ride full of mystery and mayhem.” -- ScienceFiction.com

“What makes the book work is the characters. They all have interesting flaws, strengths, short-sightedness, and wisdom: they’re well rounded enough that I really came away liking them, even some of the villains.” -- Locus Magazine

“Johnston has taken the best elements from the old masters of space opera and created a fresh and fun story.” -- scintilla.info

“The energetic second space opera in Johnston’s Remembrance War series (after the Widening Gyre) offers big, bombastic set pieces [...] Curious differences between the various alien races, futuristic tech that’s flashy without being overbearing, and the complexities of interstellar politics all entertain while rounding out the worldbuilding as Johnston pushes his characters toward an inevitable interspecies war.” -- Publishers Weekly

Michael R. Johnston is a high school English teacher and writer. He lives in Sacramento, California with his wife Elli, daughter Tegan, and more cats than is strictly necessary. His first novel, The Widening Gyre, was published in 2019 by Flame Tree Press. Even so, his daughter doesn’t think he’s cool anymore.
Loading...
or support indie stores by buying on