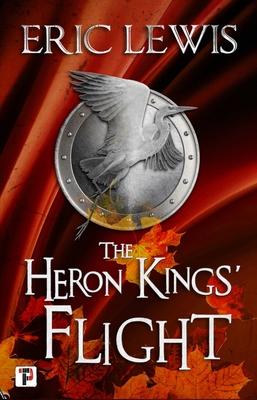 Second book in the highly praised series, following the starred review by Publishers Weekly for book one.

"Readers who love medieval-esque fantasy will delight in this rousing tale of rebellion.” — Publishers Weekly starred review of Book 1 in the series

The Heron Kings have been betrayed. A century after their formation from a gang of desperate peasant insurgents, the shadowy band of forest rangers suffers a rare defeat when a skirmish turns into a bloody ambush. Their shaky truce with the crown is tested as young members Linet and Aerrus work to track down their enemies. When reluctant peacetime soldier Eyvind reveals a conspiracy to welcome the charismatic invader Phynagoras, the trio must convince a weak king and pitifully few allies to stand against the storm.

Their only hope lies in the forgotten tactics of their own guerrilla past, and a terrifying new alchemical weapon the likes of which the world had never imagined. The only question is which side will be destroyed by it first...

Praise For The Heron Kings' Flight…

Praise for The Heron Kings, book 1 in the series:

“Lewis’s excellent debut introduces a band of well-drawn outlaws who don’t care who wins the civil war that’s ravaging their land, just so long as it ends [...] The central trio are marvelously realized, and their developments amid the ongoing horrors are effortlessly convincing. Readers who love medieval-esque fantasy will delight in this rousing tale of rebellion.” — Publishers Weekly (Starred Review)

"There’s a Robin Hood feel to Lewis’ debut, as average citizens rise up against the warmongering upper class with justified anger [...] Readers will root for the [characters].” — ALA Booklist

“A promising debut from Eric Lewis. The Heron Kings is full of consistent characters that are inspiring and tough. Gruesome at times, this shows the true savagery of war and has enough action and intrigue to keep you on your toes.” — GrimDark Magazine

"This pulse-pounding adventure is sure to please."
— Publishers Weekly

Eric Lewis is a research chemist weathering the latest rounds of layoffs and trying to remember how to be a person again after surviving grad school. When not subjecting his writing to serial rejection, he can be found gathering as many different sharp and pointies as possible and searching for the perfect hiking trail, archery range or single malt Scotch. THE HERON KINGS is his first novel.
Loading...
or support indie stores by buying on