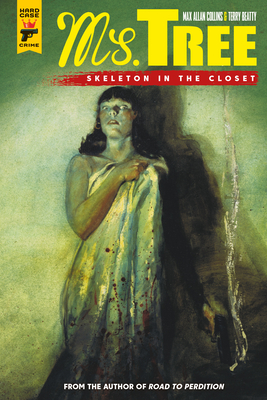 Skeleton in the Closet

From the minds of Road to Perdition author Max Allan Collins and artist Terry Beatty, comes the second collection of five classic Ms Tree comics. Follow the private investigator Ms. Michael Tree through even more thrilling cases, as she races to solve crimes of passion, murder and intrigue!

Join Ms. Michael Tree, the 6ft, 9mm carrying private detective on her thrilling adventures as she solves crimes and fights to get her revenge for her murdered husband. No case is too small, no violence too extreme, just as long as it gets the job done.

Praise For Ms. Tree Vol. 2: Skeleton in the Closet…

“Classic Collins crime tales in the comics are like his 21st century crime novels–they do not disappoint” - BORG.com

“Finishing Ms. Tree: Skeleton In The Closet, I had the same reaction to when I finished reading Ms. Tree: One Bad Mother: I want more… Now!” - Scoop

"For those who prefer their comics a little harder, a little faster, and a whole lot pulpier, Max Allan Collins and Terry Beatty's Ms. Tree Volume One: One Mean Mother, will hit the bullseye ¾ and blow it to pieces." - Mystery Scene

"As you’d expect from Max Allan Collins, this is another great read ... a classic noir style" - The Borg

"A compelling read for those of us who love the character and a great, thoroughly accessible introduction for new readers" - First Comics News

Max Allen Collins was hailed in 2004 by Publisher's Weekly as "a new breed of writer." A frequent Mystery Writers of America nominee in both fiction and non-fiction categories, he has earned an unprecedented eighteen Private Eye Writers of America nominations, winning for his Nathan Heller novels, True Detective (1983) and Stolen Away (1991).

Terry Beatty is the artist and co-creator (with Max Allan Collins) of the long-running private eye series, Ms. Tree. Collaborations with Collins also include Mike Mist, Mickey Spillane's Mike Danger and Johnny Dynamite.
Beatty has been the primary inker of DC Comics' "animated-style" Batman comics, including a four-year stint inking Chris Jones' pencils on The Batman Strikes!
From 2012 to 2017, Beatty was the artist for the Sunday episodes of the King Features comic strip, The Phantom.
Loading...
or support indie stores by buying on