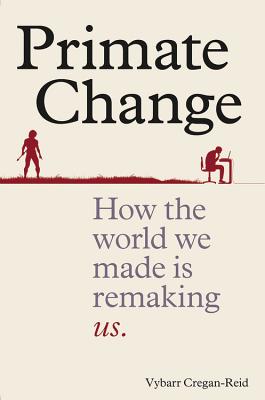 How the world we made is remaking us

IF YOU THINK YOU ARE YOU, THINK AGAIN.
PRIMATE CHANGE is a wide-ranging, polemical look at how and why the human body has changed since humankind first got up on two feet. Spanning the entirety of human history - from primate to transhuman - Vybarr Cregan-Reid's book investigates where we came from, who we are today and how modern technology will change us beyond recognition.
In the last two hundred years, humans have made such a tremendous impact on the world that our geological epoch is about to be declared the 'Anthropocene', or the Age of Man. But while we have been busy changing the shape of the world we inhabit, the ways of living that we have been building have, as if under the cover of darkness, been transforming our bodies and altering the expression of our DNA, too.

PRIMATE CHANGE beautifully unscrambles the complex architecture of our modern human bodies, built over millions of years and only starting to give up on us now.

'Our bodies are in a shock. Modern living is as bracing to the human body as jumping through a hole in the ice. Our bodies do not know what century they were born into and they are defending and deforming themselves in response'

Vybarr Cregan-Reid is an author and academic. He is Reader in English & Environmental Humanities in the School of English at the University of Kent. His most recent book is Footnotes: How Running Makes us Human (St Martins 2017), which reviewers called 'delightful', 'impassioned and energetic', and 'a blazing achievement'. He has written widely on the subjects of literature, health, nature and the environment for the BBC, the Guardian, The Independent, The Big Issue, The Telegraph, The Mail, The Washington Post, The I Newspaper, Wanderlust, Literary Review, New Zealand Herald and he has appeared on Radio 4 and Sky News.
or
Not Currently Available for Direct Purchase
Copyright © 2020 American Booksellers Association