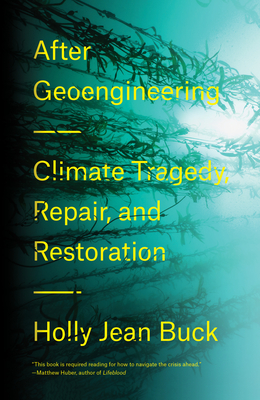 What if the people seized the means of climate production?

The window for action on climate change is closing rapidly. We are hurtling ever faster towards climate catastrophe—the destruction of a habitable world for many species, perhaps the near-extinction of our own. As anxieties about global temperatures soar, demands for urgent action grow louder. What can be done? Can this process be reversed? Once temperatures rise, is there any going back? Some are thinking about releasing aerosols into the stratosphere in order to reflect sunlight back into space and cool the earth. And this may be necessary, if it actually works. But it would only be the beginning; it’s what comes after that counts.

In this groundbreaking book, Holly Jean Buck charts a possible course to a liveable future. Climate restoration will require not just innovative technologies to remove carbon from the atmosphere, but social and economic transformation. The steps we must take are enormous, and they must be taken soon. Looking at industrial-scale seaweed farms, the grinding of rocks to sequester carbon at the bottom of the sea, the restoration of wetlands, and reforestation, Buck examines possible methods for such transformations and meets the people developing them.

Both critical and utopian, speculative and realistic, After Geoengineering presents a series of possible futures. Rejecting the idea that technological solutions are some kind of easy workaround, Holly Jean Buck outlines the kind of social transformation that will be necessary to repair our relationship to the earth if we are to continue living here.

Praise For After Geoengineering: Climate Tragedy, Repair, and Restoration…

“A limpid synthesis of elegy and urgency. Unflinching about what looms for the world, Holly Buck outlines radical, transformative demands and agendas for a least-bad way forward, in the service of better ways thereafter.”
—China Miéville, author of October: the Story of the Russian Revolution

“This is the guide to the future. There’s hardly anything scarier than geoengineering, but it is coming towards us, closer for every day of CO2 spewed into the air. It can no longer be wished away—and thankfully, we have Holly Jean Buck to explain what it might look like and how it could be survived, perhaps even used for the good of the planet. Written in graceful prose, combining the latest science with the crystal ball of a sci-fi author, this book shines. Anyone worried about what comes next should read it.”
—Andreas Malm, author of The Progress of This Storm and Fossil Capital

“In the face of rapid climate change, how should we think about geoengineering? In this timely and bold book, Holly Jean Buck lays out a case for approaching geoengineering from the Left. Blending journalistic insight with scientific speculation, After Geoenginneering inspires much-needed thought experiments about the changes coming to our warmer and weirder world.”
—Joel Wainwright, author of Decolonizing Development, Geopiracy, and Climate Leviathan (with Geoff Mann)

“With After Geoengineering, Holly Jean Buck offers a sobering, prescient vision of a climate realism that we should heed. She decisively alters how the left might understand what anthropogenic intervention may require, both technologically and ethically. There are no easy solutions on offer, only difficult paths to cross while they are still open.”
—Benjamin H. Bratton, University of California, San Diego

“Geoengineering is the ‘third rail’ of left green politics that no one dares to touch. Holly Jean Buck transcends stale debates and allows us to imagine a hopeful world beyond both capitalism and climate catastrophe. Providing a rigorous (and joyful!) look at technological options to buy time, adapt to change, and renew the planet, this radical book is long overdue.”
—Paul Robbins, Nelson Institute for Environmental Studies

“Climate is now an unmitigated disaster. Progressive activists are going to need to get up to speed on the emerging geoengineering industrial complex. Holly Jean Buck walks us briskly through what we need to know to engage with this deepening planetary crisis.”
—McKenzie Wark, author of Molecular Red

“The topic of geoengineering usually merits a quick dismissal among environmentalists, but Holly Buck’s After Geoengineering shows it is extremely complex with multiple available options. Beautifully written, including creative ‘sketches’ imagining future scenarios, this book is required reading for how to navigateAfter Geoenginneering the crisis ahead.”
—Matt Huber, author of Lifeblood: Oil, Freedom and the Forces of Capital

“A really fantastic book; as if Ursula K. Le Guin wrote a definitive study of carbon management options for the twenty-first century. A meticulously researched, beautifully drawn portrait of dozens of possible futures and how to make them reality. A must-read for anyone who cares about making a cooler and more just future for generations to come.”
—Emma Marris, author of Rambunctious Garden: Saving Nature in a Post-Wild World

“Original, thought-provoking … Accounts of cutting-edge technologies … are shot through with interludes of speculative fiction, which inject human nuance into risk-laden scenarios.”
—Nature

“After Geoengineering … hints, though, that the movement is at last starting to offer strategic thinking commensurate with the crisis at hand.”
—Troy Vettese, Boston Review

Holly Buck writes on emerging technologies in the Anthropocene, with work appearing in journals such as Development and Change, Climatic Change, Global Sustainability, Annals of the American Association of Geographers, and Hypatia. Since 2009, she has been researching the social dimensions of geoengineering as a faculty fellow with the Forum for Climate Engineering Assessment in Washington, DC, as a member of the Steering Committee for the international Climate Engineering Conference in Berlin, and as a doctoral researcher at Cornell University, from which she holds a PhD in development sociology.
Loading...
or
Not Currently Available for Direct Purchase