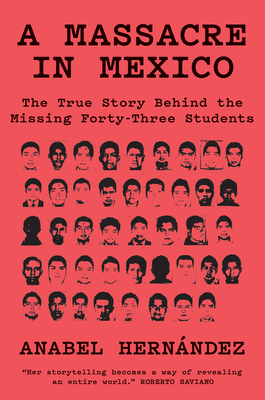 A Massacre in Mexico

The True Story Behind the Missing Forty-Three Students

The definitive account of the disappearance of forty-three Mexican students

On September 26, 2014, a party of students from the Ayotzinapa Rural Teachers’ College were en route to a protest when intercepted by local police. A confrontation ensued. Come the morning, the students were nowhere to be found. The crime that had transpired and the resultant cover-up brought the profound depths of corruption in the Mexican government and police force—as well as the vulnerability of ordinary Mexicans—into stark relief.

Investigative reporter Anabel Hernández reconstructs the terrible events of that night and its aftermath, giving us the most complete picture available. Her sources are unparalleled. In researching this book, she secured access to internal government documents that have not been made public and to surveillance footage the government has tried to hide and destroy. Hernández demolishes the Mexican state’s official version of events, which the Peña Nieto government cynically dubbed the “historic truth.” As her research shows, state officials at all levels, from police and prosecutors to the upper echelons of government, conspired to put together a fake case, concealing and manipulating evidence, and arresting and torturing dozens of “suspects,” procuring forced confessions to back up the official lie. By following the role of the various Mexican state agencies through the events in such remarkable detail, A Massacre in Mexico shows with exacting precision precisely who is responsible for this monumental crime and who needs to be held accountable.


Praise For A Massacre in Mexico: The True Story Behind the Missing Forty-Three Students…

“[A] detailed coverage of the government’s horrifying and often clumsy attempt at a cover-up … her sources are clear and convincing.”
—Rachel Nolan, London Review of Books

“A Massacre in Mexico is a harrowing inquisition in to the fate of forty-three missing Mexican students and the governmental cover-up … This is sure to be a controversial, significant work, one that might anger more than a few powerful people in Mexico. Anabel Hernandez valiantly risks her safety to uncover a crime that the world shouldn’t forget.”
—Mya Alexice

“Her storytelling becomes a way of revealing an entire world.”
—Roberto Saviano

“It is the most comprehensive account of what is known about the attack—and about the astonishingly corrupt government investigation that followed… A Massacre in Mexico presents an overwhelming case that federal government investigators working for the administration of Mexican president Enrique Peña Nieto created a false narrative of local culpability and sought to close the case before an investigation could reveal the involvement of federal officials.”
—Christy Thornton, Jacobin

“A harrowing inquisition into the fate of forty-three missing Mexican students and the governmental cover-up … Hernandez delves deep into the corruption and violence despite threats against her life.”
—Foreword Reviews

“Brilliant … a masterful piece of journalism which counteracts the narrative of the state.”
—Matt Williams, Medium

“A powerful investigation for fans of true crime and nonfiction about the international drug trade.”
—Frances O. Sandiford, Library Journal

Anabel Hernández is one of Mexico’s leading investigative journalists. She has worked on national dailies, including Reforma, Milenio, El Universal and its investigative supplement, La Revista, where the work on the alleged collusion of government officials and drug lords won her the Golden Pen of Freedom award, presented by the World Association of Newspapers and News Publishers. Her previous books include the award-winning Narcoland.