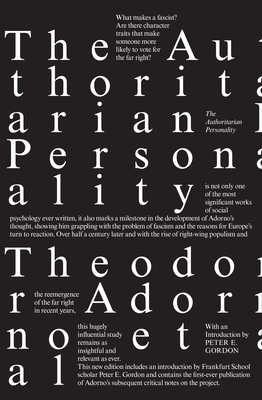 Hugely influential study of the psychology of authoritarianism

What makes a fascist? Are there character traits that make someone more likely to vote for the far right? The Authoritarian Personality is not only one of the most significant works of social psychology ever written, it also marks a milestone in the development of Adorno’s thought, showing him grappling with the problem of fascism and the reasons for Europe’s turn to reaction. Over half a century later and with the rise of right-wing populism and the reemergence of the far-right in recent years, this hugely influential study remains as insightful and relevant as ever.

This new edition includes an introduction by Frankfurt School scholar Peter E. Gordon and contains the first-ever publication of Adorno’s subsequent critical notes on the project.

Praise For The Authoritarian Personality…

“Adorno and his colleagues could easily have been describing Alex Jones’s paranoid InfoWars rants or the racist views expressed by many Trump supporters.”
—Molly Worthen, New York Times

“A monumental study which blazes new trails in the investigation of prejudice.”
—Richard A. Schermerhorn, Social Forces

Theodor Adorno was Director of the Institute for Social Research at the University of Frankfurt from 1956 until his death in 1969. His works include In Search of Wagner, Aesthetic Theory, Negative Dialectics, and (with Max Horkheimer) Dialectic of Enlightenment and Towards a New Manifesto.

Else Frenkel-Brunswik was a Polish-Austrian psychologist based at the University of California at Berkeley.

Daniel J. Levinson was a psychologist and one of the founders of the field of positive adult development.

Nevitt Sanford was Professor of Psychology at the University of California at Berkeley.
Loading...
or
Not Currently Available for Direct Purchase